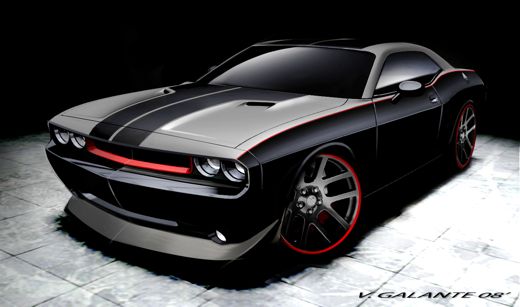 Despite a sick economy, days ago rumors of a merger with GM, and the tenuous scenario of being owned by Cerberus Capital Management, the Mopar folks at Dodge intend to put on one heck of a show at this year's Specialty Equipment Market Association humongo gathering (aka SEMA). We reported to you yesterday about the '09 Dodge Challenger SRT10 Concept that will be at this year's show, and apparently that was only one of the tricks up Dodge's sleeve. A posse of six additional concepts (two challengers, four Ram Trucks), all clearly having spent serious time in the gym, will strut into SEMA this year, prepared to make a powerful statement about Dodge's commitment to power, performance, and badass style.

More than just some mean-looking add-ons from the Mopar Underground design team, the Dodge Challenger Blacktop adds mechanical and visual accoutrements to its R/T-level 5.7-liter HEMI teamed with the new-for-'09 six-speed manual. A Mopar coil-over suspension, strut tower brace, and 22-inchers give the Blacktop an athletic stance with the moves to match, and a cat-back dual exhaust and low-restriction cold air intake let that wondeful Mopar roar raise the hair on the back of the necks of passersby. Visually, custom spoilers and a front brow are complemented by a black-on-black racing stripe paint scheme and the aforementioned hunkered stance courtesy of the coil-over suspension. 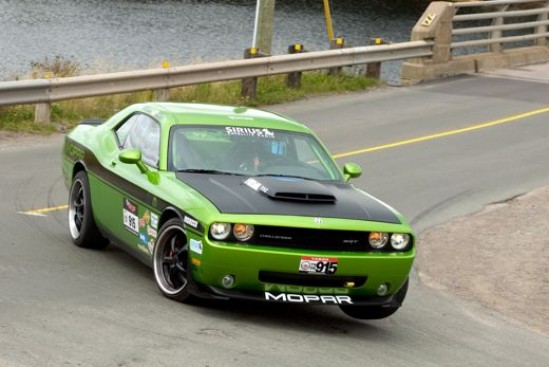 Dodge's description of "Samantha," the Dodge Challenger Targa, reads like a transgendered metamorphosis; she "started life as a Mopar Challenger drag race package car" and even borrowed certain features from the undercarriage of a Dodge Viper en route to a final transformation. Another oddity in the nomenclature is the use of the word "Targa," which we take to mean a body style wherein the roof panel may be removed. Not so--in this case, it's just in the name, and the fact that this full-blown competition car raced in and completed the Targa Newfoundland race earlier this year. Canadian races and curious female handle aside, this snakeskin green devil cradles a 392 HEMI Mopar crate motor that shakes with 540 hp and 490 pound-feet of torque. We'll take those kind of power numbers anyday, regardless of whether they come packaged as he, she, or it. Reigning in all that ferocity are Stop-Tech brakes with six-piston calipers up front and race suspension upgrades from the Nurburgring-conquering Viper ACR. Fasten your setbelt, and prepare to grin from ear-to-ear. 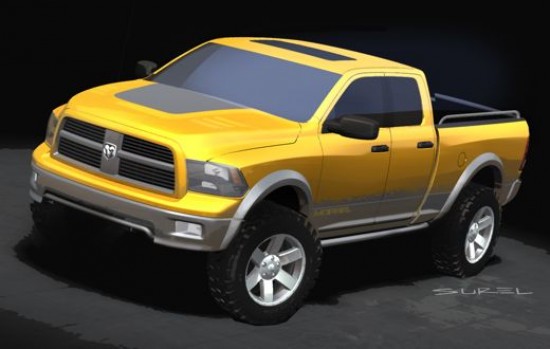 Moving into some great twists and turns on Dodge's fantastic new Ram platform, we start with the Dodge Ram TRXtreme. Starting with the off-road '09 Ram TRX package, this quad cab TRX-4 off-road got boosted by a 4.5-inch Mopar lift kit; 20-inch polished wheels fill the wells and are outfitted with knobby BFG tires. A bright yellow/mineral gray two-tone with a mud spatter effect covers the truck (can't you just add your own real mud spatter?). Extendable Mopar mirrors are a welcome necessity for rigs this huge, and a bespoke steel hood with cooling louvers and a larger air intake should vent any excess heat generated by driving this beast to the edge of its capabilities. A tuned exhaust, bed accessory system, DVD headrests, and unique leather seats round out the mods.

Representing the street performance end of the tweaked Rams is the R/T, featuring a 380-hp HEMI V-8, a low 4.10 rear end, and a high stall torque converter (barely any slush in this fluid coupling) ensure aggressive, right-now responses from the powertrain. For the visuals, Dodge looked to the Challenger for inspiration, bathing this truck in classic B5 blue, giving it a Mopar dual-snorkel aluminum hood, carbon fiber accent stripes, a body kit consisting of sill and box pieces, and a chin spoiler. The wheels supporting the lowered suspension (courtesy of an air suspension kit by Mopar) are 22-inchers from Alcoa. An "Ambient under-rail LED lighting system" and Katzkin leather seats sound like silly Vegas bling, but perhaps in person they will lend appropriate flair to a serious performance truck. With all-new Rams featuring a coil-sprung suspension, the R/T Ram should be an even more impressive handler, and it's always been at the top of the full-size class, a gargantuan beast that dances on some quick feet. Think Emmitt Smith, the unlikely 212-pound twinkle toes on "Dancing with the Stars."

Back to the offroading realm is the Dodge Ram Sportsman. Dodge hasn't used the Sportsman name in years, and I recall fondly the 1970s-vintage, sparkly green, extended 15-passenger elementary school van of my childhood. In comparison to that tired workhorse's 90 degrees of steering play and tried-and-true LA-series Mopar V-8, this Sportsman rides on the new Ram chassis and instead of sparkly green paint, it features a camo-inspired "blowing leaves" paint scheme by the folks at Mopar Underground. Dodge doesn't mention the powertrain, but how about the new, upcoming mid-size Cummins turbodiesel V-8 currently under development? Camo and diesel seem to agree like your hand in a calfskin glove. Dodge's segment-exclusive RamBox storage system is filled with outdoor toys and gear, and this truck also features Mopar telescoping trailer tow mirrors that are color-matched to the rest of the truck (watch out for that tree). A lift kit elevates everything by two inches, and 20-inch wheels clinging to 33-inch tires lend a tough stance and serious capability. SEMA tricked-out status is kept in check with Sirius Satellite TV/video in headrest screens, Katzkin leather seats, matching door pulls and steering wheel, and the "Mopar ambient lighting system" that they say gives a unique glow inside. 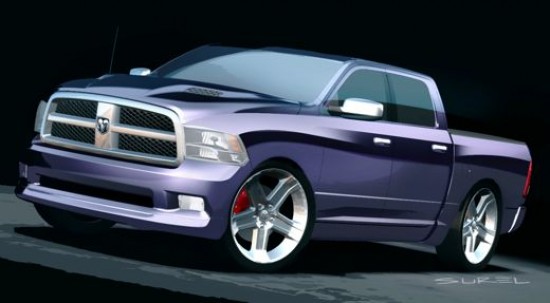 The final Ram-based creation is another one for roaming the mean streets and is the one truck in this quartet that seems the most image modified, and perhaps the least breathed-upon from a performance standpoint. The Ram Mopar Street Packge gets a sinister coat of Blackberry pearl paint, a slight body drop/leveling kit to lend some swagger, and 22 Alcoas that send the right message for proper street cred. A hard tonneau cover (a la Toyota Tacoma X-Runner) and all-aluminum dual-snorkel hood lend attitude from tail to nose, while a a Mopar bed rug (the '70s live! tell us it's deep shag carpeting) and under-rail accent LED lighting keep with this truck's fashion-forward mission. A 390-hp HEMI V-8 provides motivation, and announces its presence through a tuned dual exhaust.

Dodge is apparently serious about resurrecting its storied retro hi-po image, and from the bristling, sinewed flanks of the mean charger to the crosshair grille of its brash new Ram, they picked two perfect platforms to bring back image and performance that we thought was long gone from a slumbering Mopar. We're grinning with excitement at the functional shaker hoods, raucous HEMI V-8s, big brash wheels, classic colors, serious handling packages, resurrection of the Sportsman name, and even some delightfully retro fitment of carpeting in the bed of the Ram Mopar Street Package. This economy may have Dodge and the industry down, but regardless what the future holds for this company these six fantastic concept vehicles (which all seem just about production-ready) show that a privately owned Chrysler isn't afraid to appeal to enthusiasts everywhere who still have some leaded fuel mixed with adrenaline pumping through their veins. Throw in the the upcoming 5.0-liter (rumored size) Cummins mid-size turbodiesel V-8, claimed to boost fuel economy by 25 percent, and Dodge will have some laudable efficiency numbers to add to these rapid transit machines.--Colin Mathews