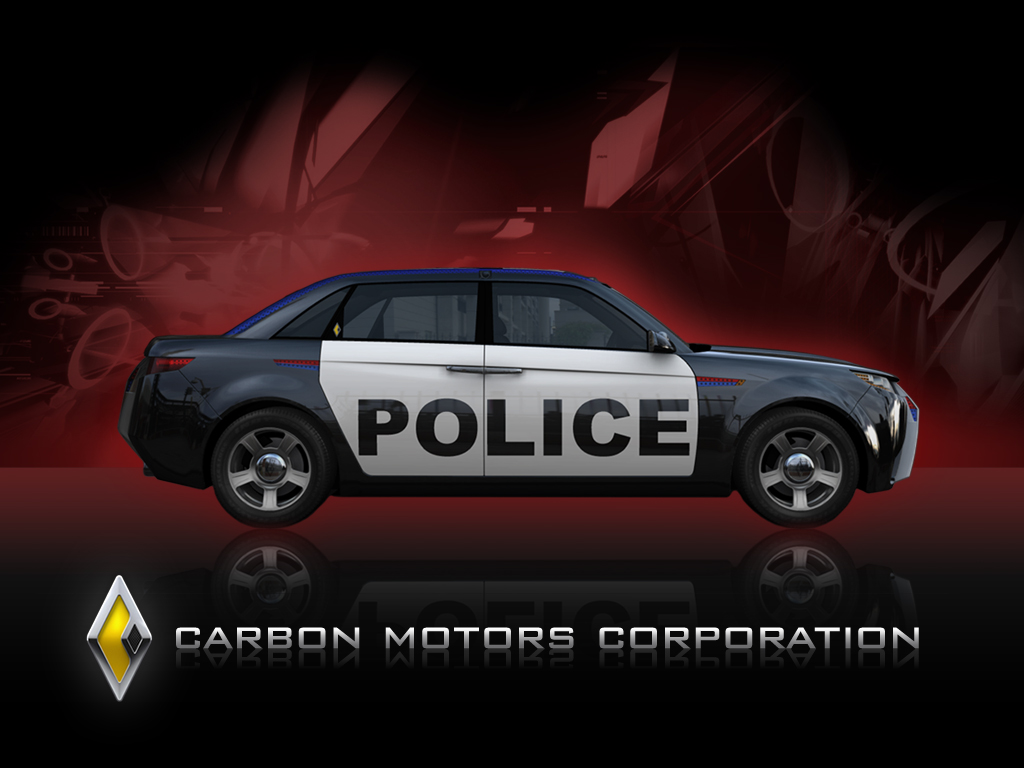 Your City's Finest will be driving around in stealthy, biodiesel-burning, custom-tailored RoboCop mean machines if Carbon Motors has anything to say about the future of police service vehicles. Carbon is critical of current police cars that it feels are little more than cobbled-together civilian sedans full of safety and performance compromises that hamper Police' ability to effectively do their job. To address that criticism, the company has developed the code-named E7 vehicle "by law enforcement, for law enforcement."

Carbon Motors will unveil the E7 on October 14 during the 2008 Pure Justice Tour (no, you can't get tickets from Ticketmaster), which starts in Chicago and includes San Diego, where the 115th annual International Association of Chiefs of Police (IACP) meeting will occur. Carbon claims that the E7 (to be named eventually by the law enforcement community) "represents the next generation of law enforcement technology" and states that it is the first ever vehicle designed solely for law enforcement purposes.

From the specs given on Carbon Motors' Web site, the E7 sounds like a European limo with its 122-inch wheelbase, relatively svelte 4,000-pound curb weight courtesy of an aluminum spaceframe, four-wheel independent suspension, rear-wheel drive, 18-inch wheels, and 50/50 weight distribution. Motivating all that metal, and the perps inside it, are a 3.0-liter turbodiesel (six cylinders? five?) and a six-speed automatic that Carbon claims are good for 300 horsepower, 420 pound-feet, 0-60 in 6.5 seconds, and combined fuel economy of around 28-30 mpg. Bringing two seemingly disparate groups together--the police and the environmentalists--the E7 even lists biodiesel as a recommended fuel. The last bit of these too-good-to-be-true specs are an expected 250,000-mile service life.

The litany of impressive crash-resistance figures, emergency lights and "bass siren," night vision, 360-degree exterior surveillance, integrated shotgun mounts, and hoseable rear passenger compartment is too numerous to list here. Carbon claims the pricing, to be announced in a few months, will be competitive with current law enforcement vehicles sold in the United States.

Looking very European (Saab/Citroen/Alfa/Renault) in the details, and quite a bit previous-gen Subaru WRX in its chunky, muscular profile, what we can see of the E7 reveals short overhangs on a long wheelbase, taut angularity, squinting multi-element headlights, an elongated passenger compartment with suicide (Carbon calls them "coach") rear doors, and not an ounce of the body fat that has long enveloped full-frame U.S. police cruisers.

The E7 and the Pure Justice Tour will also travel through Indianapolis, Columbus, San Jose, San Francisco, Greenville, and Jacksonville on its way to Tampa, its final stop. For your own sneak peek of this urban warrior, to the tune of some righteous heavy metal, click on over to "Ours Is Real" at YouTube.--Colin Mathews