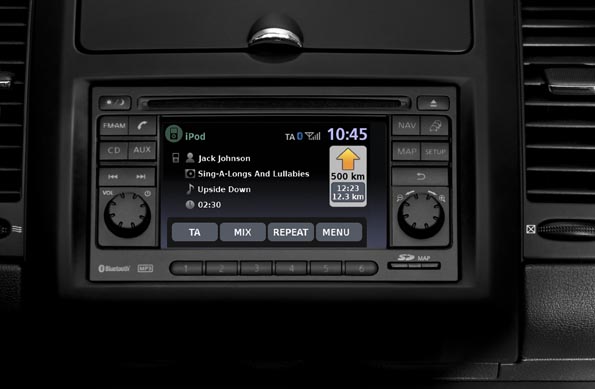 Believing that buyers of compact cars shouldn't have to deal with economy-sounding radios and the lack of affordbale nav and in-car communication systems, automaker giant Nissan is rolling out its new Connect System. Described as an "integrated audio, navigation and communication system," the system promises high-fidelity audio, Bluetooth integration for mobile phones, and even wireless playing of Bluetooth-equipped phone/MP3 players, including track listings and playback control through the Connect central five-inch touch-screen interface. An auxiliary jack is also incorporated for playback of non-Bluetooth music devices.

The navigation system can communicate with users in nine languages total, and the navigation features an Eco mode that calculates a route based first and foremost on increasing fuel economy. A USB input is integrated into the unit, mounted in the storage are on top of the dashboard alongside the auxiliary jack, allowing MP3 players, hard drives, or other music players to be stored securely out of sight while remaining connected to the system. Nissan's Connect system was developed in conjunction with the car multimedia division of the Bosch Group.

This is the kind of smart thinking we like from automakers, and it can only help to increase the appeal of small cars to buyers who are accustomed to their rolling office/gymnasium/movie theater monster trucks, luxury SUVs, and 4,000-pound-plus crossovers. American buyers in the Heartland associate economy cars with horrible things like manual crank windows, tinny two-speaker radios, no A/C, and God forbid, having to read a map or ask for directions at the gas station. The launch of Nissan's Connect is well-timed with a market and a public that is downsizing, and now fans of tech-laden luxury SUVs can more easily step down into miserly modes of transportation without feeling they've been downgraded.

Nissan Connect will make its debut on the new European Note vehicle, to be sold beginning in 2009. Another vehicle offering navigation at a low price point is the '09 Suzuki SX4, in which an integrated Garmin navigation unit comes standard on the Sport model starting under $16,000. However, the Suzuki doesn't promise the Connect's Bluetooth capabilities or entertainment/MP3 connections.--Colin Mathews