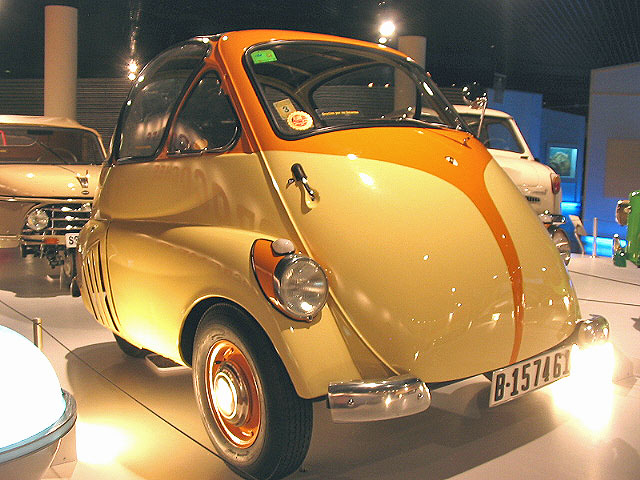 This isn't the first year that pinched pocketbooks and a faltering economy have forced automakers to re-invent and downsize. After WWII, according to Wikipedia, short-distance, economically minded transportation was a huge need in Europe. Enter the Isetta, designed originally in Italy, and subsequently produced all over Europe, including in Spain, Belgium, France, Germany, and Britain. The vehicle even saw successful production in Brazil. Its popularity made the Isetta microcar one of the most successful ever, speaking in post-WWII terms.

Think the new Chrysler/GEM Peapod looks strange? Legions of Jalopnik viewers apparently do, having launched a design-a-Peapod contest with hilarious and creative results (make sure you scroll down and across pages to check out all the bizarre entries). But try this out for design madness: the BMW 600, pictured below. No doubt, many of you are familiar with the so-ugly-it's-cute Isetta, with its reverse-tricycle wheel layout and front clamshell door that take the entire steering column with it upon opening. But the BMW 600, intended to be a larger version of the Isetta, went rapidly from cute/strange to scary/surreal, like a 16-year-old who just won't stop wearing OshKosh overalls and a little hat with the propeller on top.

The extra-awkward, stretched version of the original Isetta had the trademark Isetta front door but also featured one additional rear passenger suicide-style door. In place of the Isetta's single cylinder, the BMW 600 featured a V-twin air-cooled unit from the BMW motorcycle group with a whopping top speed of 64 mph. According to Wikipedia, only 34,000 units made it out of the factory due to sales pressure from the Volkswagen Beetle, a vehicle that looked a lot more like a traditional car than the BMW 600.

The question remains: did the BMW 600 crawl out of a crazed design mind or was it simply forced by 15 committees in charge of utility and efficiency, perhaps like the AMC Pacer or Cadillac Cimarron? Regardless, this vehicle is unmistakably unique and has earned a place in econo-car history for making remarkably daring (haphazard?) choices.--Colin Mathews, photos from WikiCommons 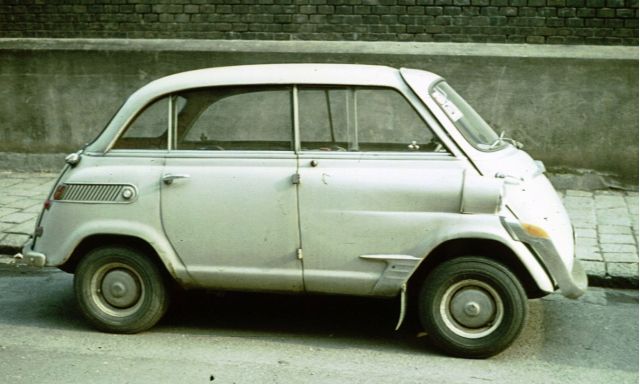