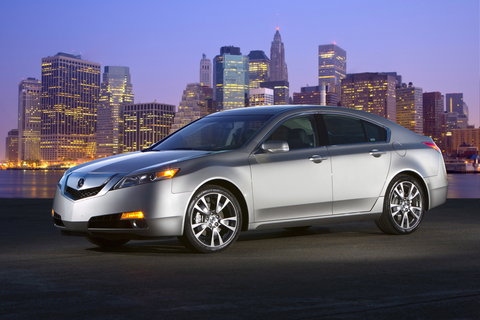 Sport sedan drivers who like to shift it themselves will have to wait until model year 2010 for an Acura TL with a manual transmission. Judging by the six-speed, short-throw, aluminum-topped stick in its current TSX, we have no doubt the upcoming TL manual will be a pleasure to row through the gears.

It's a shame Acura isn't releasing this transmission alongside the intro of its new TL, perhaps lending it more credence as a true driver's car. That said, the U.S. market buys manual transmissions in barely a trickle, so Acura folk probably figured they could take an extra year to make the new transmission perfect without really impacting sales. What's less forgivable, however, is that the manual will only be available on the pricier SH-AWD model.

"The new manual transmission equipped TL SH-AWD® really allows the enthusiast driver to take full advantage of the performance of Acura's SH-AWD® system," said Dick Colliver, executive vice president of sales. Yeah, but what about the drivers who just wants to enjoy the satisfying snick-snick of a Honda manual transmission outside of the extreme performance driving where SH-AWD really comes alive?

The new transmission is more robust than earlier TL manuals, sports a new clutch, comes with stiffer engine mounts, and results in weight savings of 110 pounds compared to the six-speed auto currently available. It even has the cool hill-hold feature that quirky Subaru has been doing since the '70s. We say, reduce the alphabet soup of the only model this transmission will come in (TL SH-AWD 6MT) and put it in the base TL, too.--Colin Mathews