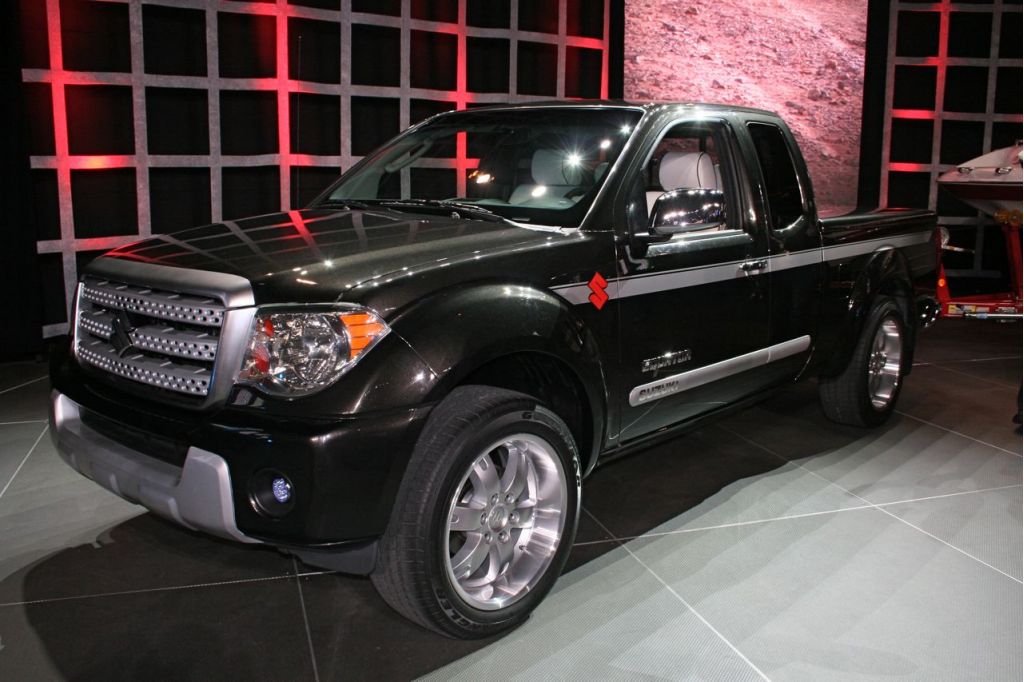 Nissan isn't trying to pull the wool over anyone's eyes with its new mid-size truck, the '09 Equator. Clearly a Nissan Frontier with, we think, a very attractive schnoz, Suzuki brass are quick to comment that the new-to-Suzuki truck was "developed as a joint effort with Nissan North America, Inc." But Nissan's capable and gutsy Frontier is not a bad place to start by any means. And Suzuki's research indicates that its armada of motorcycle, marine, and ATV owners are "more likely to have a pickup at home" and happen to be extremely brand loyal to Suzuki. Enter the Equator, which in 2WD, V-6 guise will happily tow 6,500 pounds of off-road toys.

Knowing that its Equator might--unlike most mall-bound mid-size trucks--actually see real off-road duty and probably tow some cool toys around in the process, it designed a special, slanted bed-extender tailgate that quite perfectly cradles the rear wheel of a dirt bike in the short-bed, crew-cab version. In conjunction with five heavy-duty C-channel aluminum rails where adjustable tracks reside allowing flexible tie-down of various items, a standard spray-on bedliner from the factory, removable utility cleats that side into side channels, and plenty of additional options for this rack system, the Equator is like the ridiculously equipped, well-thought-out, properly designed vehicle the Pontiac Aztek always wanted to be. Minus the tent and front-wheel drive.

Equator's base engine is Nissan's 2.5-liter DOHC four cylinder with 152 horsepower and 171 pound-feet of torque, available with a five-speed manual or a five-speed, electronically controlled automatic. Optional is the same stout, 4.0-liter DOHC V-6 found in the Frontier, an engine based on the award-winning VQ-series V-6 that Nissan and Infiniti use across their lineup. This optional engine is offered only with the five-speed automatic and features 261 horsepower and 281 pound-feet of torque.

We had the chance to a roam a particularly wet and rocky part of the 1,000-acre Knibbe Ranch outside San Antonio, Texas, in a new Equator and came away impressed. A solid rear axle was our friend during tricky climbing, respectable ground clearance kept us moving through streams and over stumps, the 4.0-liter V-6 is torquey and smooth (downright furious in low range), and Hill Descent and Hill Hold make precipitous ascent and descent almost too easy. Sure, the Suzuki won't do anything a similarly equipped Nissan Frontier can't do, but it will tote that Suzuki dirt bike with ridiculous ease, and unlike Nissan's Frontier, Suzuki's 100,000-mile/seven-year, zero-deductible powertrain warranty is fully transferable beyond the truck's original owner.

Rebadged vehicles can range from thinly disguised sales schemes (Mitsubishi Raider) to intelligent moves that will spread the wealth of a great platform to more buyers. In Suzuki's case, we're happy to know that even more individuals will be taking a great truck out into the conditions for which it was designed.--Colin Mathews