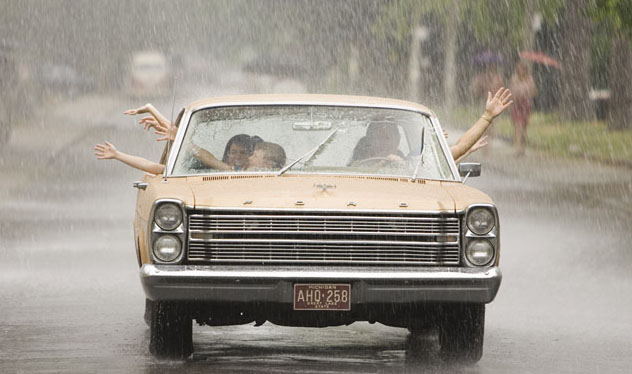 Intermittent wipers may not seem the equal of sweeping cinematic themes like Alexander the Great's push across Asia, or even Cher's drive across Rodeo Drive.

Flash of Genius, an upcoming release from Universal Pictures/Spyglass Entertainment, takes a stab at the tale anyway as it chronicles the story of college professor/basement inventor Robert Kearns, who invented intermittent wipers and had to sue to get his place in the history books--and at the bank deposit window.

Kearns is played by Greg Kinnear who creates the electronics necessary for intermittent windshield wipers. In 1967, this was an advancement that "every major car company in the world was struggling to invent."

From the YouTube preview, the Preston Tucker/Michael Clayton-esque movie tells the story of a driven, hard-working family man played by Kinnear who is at first courted by Ford Motor Company, then later cast aside as Ford execs steal his invention and release it as their own. This story will probably play well in a society riddled with corporate malfeasance in recent years, from the Enron and WorldCom scandals to wild speculation and predatory lending in real estate. Trust of the almighty corporation is at an all-time low, and Universal's forthcoming movie shows that corporate greed and deceit, alas, ain't nothing new.

Kinnear goes on to fight back against FoMoCo in what may be the best David vs. Goliath story since Julia Roberts' brilliant portrayal of Erin Brockovich in the movie of the same name. An American individual triumphing over collective greed is change we can believe in right now, to borrow a phrase, and it's a story that will likely resonate with dismayed, distrustful, and downtrodden Americans.--Colin Mathews