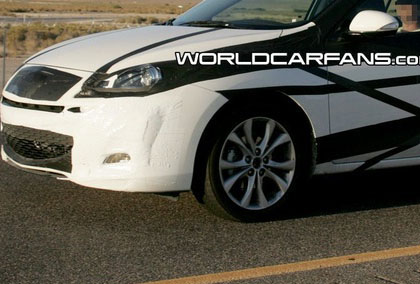 WorldCarFans reports that a tourist got a pretty clean look at the new 2010 Mazda 3, despite some tricky car-to-car photography at 70 mph.

Originally due for a release towards the end of '09, it now appears on target for a showroom release in the summer of '09 as an...an...a '10 model? Or should we say "oh-ten" model? Oh, bother, the hassles of new millennium nomenclature. Somebody consult m-w.com, please.

The new Mazda will continue to ride on Ford's global C1 platform. You know, the one that gives Europe a brilliant Focus while leaving us put-putting around in our little chrome-gilled pretender here in the states. Further, WorldCarFans states that the new 3 will be slightly longer and wider, as well as sporting a bump in engine displacement and mpg. They also state it will come with six speeds in its manual transmission. Watch for the official release at the L.A. Auto Show this November.

We hope to see the Mazdaspeed 3 continued and perhaps finally fitted with an optional AWD system, giving it true claim as a WRX and Evo competitor. Said drive system might also allow full boost in first and second gears, currently limited to protect those lonely front axles and CV joints from being pureed by the stout DISI turbo four (Direct Injected Spark Ignition).--Colin Mathews