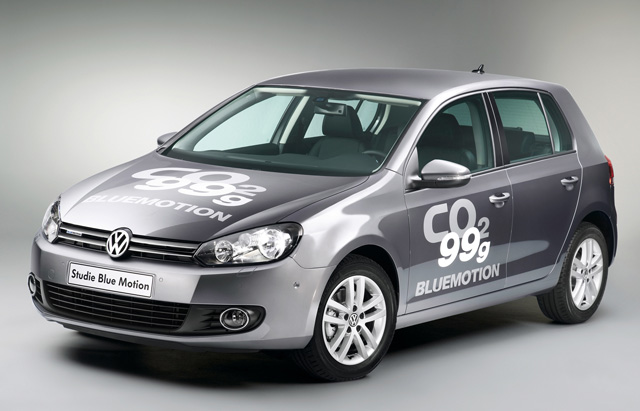 Piggybacking the announcement of its Gen VI Golf (Rabbit here in the states), VW installed its 1.6-liter common-rail diesel into a version of that vehicle to achieve 74.3 mpg on the European cycle (that equates to roughly 62 mpg in U.S. terms). A bit smaller than the 2.0 TDI in its newest U.S. offering, the Jetta TDI Clean Diesel, the 1.6-liter mill in the Golf BlueMotion Concept generates 104 horsepower and 184 lb-ft of torque at 2,000 rpm.

While these power figures hobble it in the race to 60 mph against a Prius, at 11.3 seconds to 62 mph according to VW, it's wholly respectable given its miserly consumption. And if it drives anything like the 2.0-liter unit in the Jetta TDI, it will likely yield its max torque quickly, making it feel sprightlier than its performance numbers indicate.

This is big news for VW as this new BlueMotion model matches the fuel economy and CO2 emissions (99 g/km) bar set in '06 by the smaller, lighter VW Polo BlueMotion.

When VW releases the first TDI Golf in the U.K. in January, it will have a less powerful version of the 2.0-liter turbodiesel that we get here in the U.S. currently in the Jetta TDI. VW claims that engine will yield 62 mpg on the combined European cycle (just over 50 mpg in the U.S.), but also notes that the BlueMotion model with the 1.6-liter will become available in Europe "around mid 2009."

Would you be terrified by a nearly-twelve-second 0-6o mph time? The original People's Car would get dusted by a Golf BlueMotion, and Americans bought those 40-horse sleds in droves. Tell us if you prefer this answer to green problems, or if you'd rather wait on the new Prius or Honda Insight or 2011 Chevrolet Volt.

Photo from nextautos.com and VW