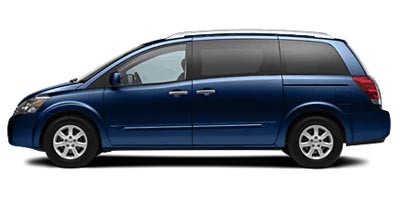 Basking in the "Tuscan Sun"--the sole new exterior color for the 2009 Nissan Quest--just got a tad pricier. In addition to new automatic door locks and the aforementioned additional color, major changes to the minivan for '09 include an MSRP jump of $750 on the base Quest 3.5 to land at $25,950.

The Quest, redesigned for 2003, presented an avant-garde flavor for a minivan that's not caught on very well with the bulk of the market that seems to favor more traditionally styled minivans. Its low beltline and sedanlike character lines impressed design critics, but no one really loved its awkward center-pod instrumentation (a la Toyota Echo and Saturn Ion). Even fairly athletic handling and cool features like its SkyView panoramic sunroof haven't saved it from relative obscurity in the minivan marketplace.

The dashboard was relocated to the right place for 2007, but power ratings for the 3.5-liter V-6 remain at a middling 235 hp, curious for an engine that makes upward of 300 horses in other Nissan/Infiniti guises. With Chrysler taking the reigns for Nissan's upcoming Titan pickup (to be a reskinned Dodge Ram, essentially), we have to wonder if they might do the same thing Volkswagen has done with its new Routan (a reskinned Dodge Caravan). Is Nissan's quest for minivan dominance yet another case of too little, too late in a marketplace dominated by moms loyal to their Honda Odysseys and Toyota Siennas? Tell us in a comment below if you think Nissan should exit minivans completely, or hang it all on a big crossover a la GM.