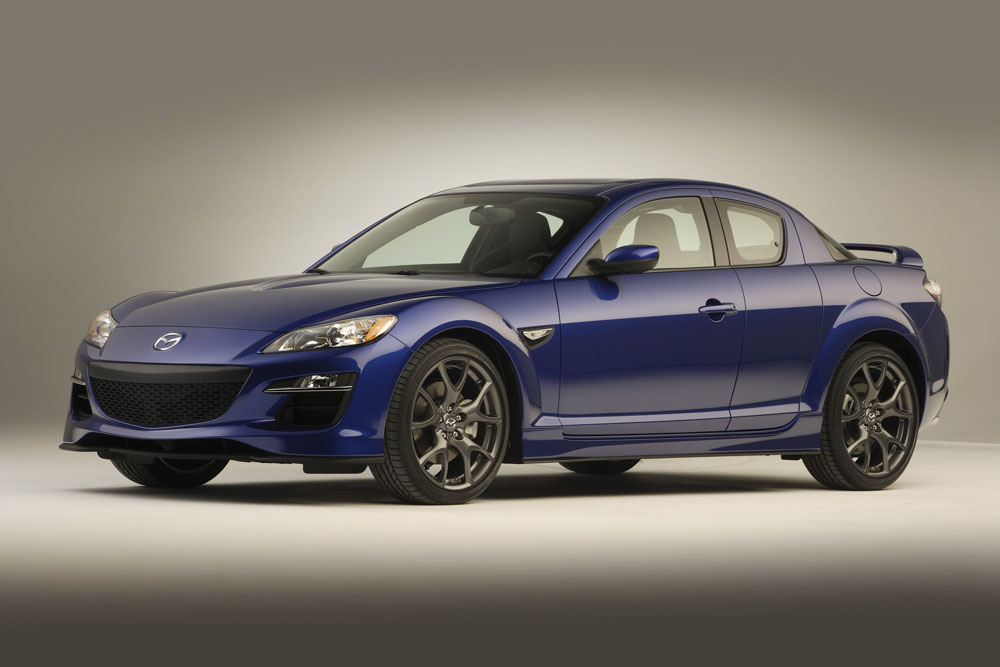 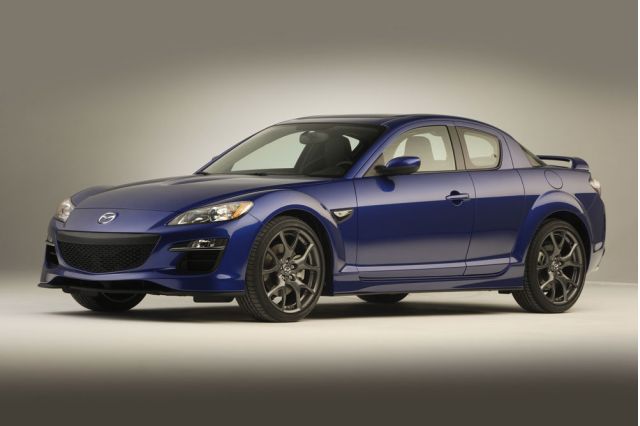 “Wow! Is that the new electric sportscar?”

That’s what the excited young driver of a big Ford F-150 with a biodiesel sticker ran up to ask just after I’d parked the latest version of Mazda’s RX-8 sportscar, the R3.

The fashionably scruffy passer-by obviously hadn’t seen the chromed exhaust pipes or heard the engine, and I’ll never know if he was referring to the two-seat Tesla Roadster or the upcoming Fisker Karma sedan, but the interaction serves to show that even five years after its introduction, the rotary-powered RX-8 is still turning heads, and it’s rare enough on the street for those who don’t keep up with the enthusiast press to think it’s the latest and greatest. (See more photos of the 2009 Mazda RX-8 here.)

The RX-8 has changed little since 2003, when Mazda brought back the rotary engine—long a signature engine design for the Japanese automaker—in the quirky, four-door RX-8 sportscar.

For 2009, the RX-8 gets a number of subtle styling changes that bring the details in line with Mazda’s other more recent models—and add a little more gloss in the process. As the changes are quite subtle, the just-right proportions and unique combination of edginess and curvaceousness are kept, thankfully without any major sheetmetal changes that might compromise them. Yet peering at the new RX-8 straight on, from the front, it looks a little wider, more aggressive, and down to business.

Inside, the RX-8 gets a minor sprucing-up, including an all-new steering wheel design that closely matches the one used on newer Mazdas such as the CX-7, while the contouring of the instrument panel itself has been redone for a better flow from the center stack to the gauge cluster, and some of the materials used—especially for climate and sound system controls and door switch panels—have been upgraded.

With smaller, rear-hinged back doors, the RX-8 is more like a 2+2 door, 2+2 seater. The doors don’t quite line up with the seats, so adults need to contort a bit to get into position, and they must especially watch their heads as the roofline curves downward at the back doors. It’s a stylish arrangement back there, with a full-length center console atop the tall center hump, but the two backseats themselves are very narrow and confining.

The rotary now comes with a variable redline system—corresponding to the red zone on the tachometer—to avoid damaging over-revving before it’s fully heated up. When cold, the tach indicates a redline of about 5,000 rpm; then after just a minute or two, it rises to 7,000 rpm, and after nearly 10 minutes it allows the engine’s full 9,000-rpm potential.

Mechanical changes are a bit more extensive. A trapezoidal strut-tower bar and improved front suspension-tower rigidity help improve overall body rigidity, and the rear suspension has been reconfigured for better performance and a quieter ride. All RX-8s with the manual transmission have a lower drive ratio to improve performance off the line.

The rest is largely carry-over. The RX-8’s center of mass is among the lowest of any new car, and aluminum suspension components and an electric power-steering system help keep weight down to just over 3,000 pounds. The high-revving 1.3-liter, twin-rotor Wankel rotary motor makes 232 horsepower with the standard six-speed manual transmission or 212 horsepower with the six-speed automatic. As a consolation, automatic cars do include steering-wheel paddle shifters.

The sum of all those changes is pretty minor, however, and what’s most noteworthy for 2009 is the debut of an enthusiast-oriented, track-ready R3 model—named after the high-performance RX-7 R1 and R2 models. The R3 piles on additional hardware, such as a sport-tuned suspension, Bilstein shocks, and high-performance tires on 19-inch wheels. The R3 also brings foam-filled front-suspension crossmembers, which help quiet the stiffer ride and aid control.

Visually, the R3 comes with fog lamps, HID headlamps, and a different bumper than the rest of the lineup, along with wider side sills. The forged alloy wheels have a smoky gray finish, appearing aggressive but not gaudy and help accent the RX-8’s lipped wheel wells.

Inside, the R3 gets snug Recaro sport seats with leather side bolsters, plus a 300-watt Bose Centerpoint sound system, a Bluetooth interface, and a keyless entry and starting system, but it doesn’t get the automatic climate control offered in closely priced the Grand Touring model.

Even if you don’t need the R3’s extra bit of track-readiness, those Recaro seats, with aggressive side bolstering in the lower cushion and backrest to help keep you from sliding around in corners, are a big selling point.

Peak torque is still just 159 pound-feet at 5,500 rpm—meaning that if you shift early at, say 3,000 rpm you don’t have much usable power. You very quickly get in the habit of upshifting between 4,000 and 5,000 rpm in normal, go-with-the-flow driving just so you’ll have enough torque on the ready to squirt through a hole in traffic and take advantage of the great steering and maneuverability.

And outside of the novel personality of the rotary engine and the odd backseat arrangement, the very low center of mass and go-kart-like feel on the road is the main selling point for the RX-8. Like with the Miata, you’re low and close to the road and don’t need to double speed limits to have fun. The front tires keep a tenacious grip, the body rarely leans, the quick-ratio, electric-boost steering unwinds nicely and brings good feedback, and there’s very little driveline lash; in all, it’s a very precise car to drive. Only when the roads were rain-slick, did we notice the back end’s tendency to step out in corners; it was always caught quickly by the electronic stability control, but it stood as a reminder that this is not a vehicle for slippery winter roads.

The gearbox has very short throws and snicks neatly into each gear, though it took a little more effort than expected to shift from 4th to 5th. The clutch of our barely broken-in test car was light and progressive, feeling much improved from the sudden engagement I’d noted in another test car several years ago.

All this time, the sound of the engine from inside the cabin is a high point. The rotary sounds somewhat like a three-cylinder bike engine and gets a similar shrieking urgency when revved to its upper end. The sharp-edged RX-8 isn’t a top choice for long-distance driving, but shift up to 6th gear, and engine noise, along with road noise, is muted enough.

Mazda was once a rotary pioneer and looked bound for an entire lineup powered by the smooth powerplants. But one of the same reasons that caused them to scale back on them in the past is also relevant now: fuel economy. The RX-8 is very thirsty; it’s disheartening in any vehicle to see the fuel gauge almost down to half mast after a hundred miles, but especially one that’s light and nimble and feels economical. We saw less than 17 mpg overall in just over a hundred miles of mixed city and suburban driving—the same kind of driving, I might add, for which we saw 22 mpg the week before in a Porsche 911 Carrera 4.

And this is why that parking encounter lingers in my mind. Mazda sure has shown plenty of compelling sportscar concept-car designs at auto shows over the past several years. Perhaps it's time to capture the excitement of the younger generation and plug one in.