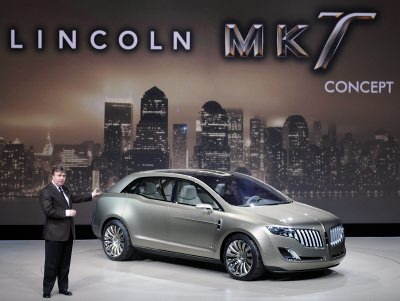 Ford says the 2010 Lincoln MKT has the green light for production, and will be shown off at January's Detroit auto show.

The MKT is based on a concept from last year's Detroit show. A three-row crossover, the MKT is derived from the mechanical set that also spawned the 2009 Ford Flex, but Lincoln says the two vehicles don't share a single exterior panel or interior trim piece.

Lincoln previewed the MKT for TheCarConnection.com today, but photos of the production version are on embargo until the Detroit auto show in January. (The concept MKT is shown here.) However, Ford president of the Americas, Mark Fields, does confirm the MKT will get a choice of powertrains--either a 3.7-liter V-6 or a 3.5-liter "EcoBoost" engine, with direct injection and turbocharging, that's good for 340 horsepower. A six-speed automatic with paddle shifters will be the sole transmission.

Ford says the MKT will come with a raft of standard features, including seven-passenger seating with a power folding third-row seat, first and second-row heated and cooled seats, and the SYNC entertainment controller. Options will include a new-generation navigation system, Sirius Travel Link and a new Cross Traffic Alert system that alerts drivers to obstacles when backing out of a parking space. The MKT will also offer an auto-park feature that steers the vehicle into a parallel-parking spot at the touch of a button.

The 2010 Lincoln MKT will be joined in showrooms by a revamped 2010 Lincoln MKZ, which will be shown at the Los Angeles auto show in November. Fields says the MKZ will not get the hybrid powertrain coming for the 2010 Ford Fusion and Mercury Milan we showed you yesterday.