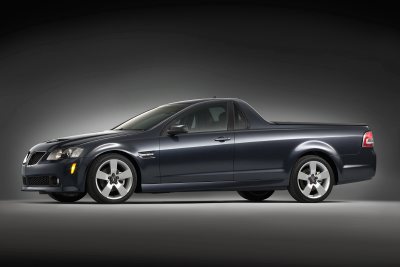 The winning name for the Pontiac sport truck shown at auto shows earlier this year is a simple one: G8 ST.

Pontiac announced this morning that its 2010 light-duty truck would wear the initials it bandied about when it first showed off the V-8-powered two-door truck. In the meantime, it's been running a naming contest on the Web to see if car pundits and enthusiasts could come up with better.

One of the names that cropped up often? El Camino, a nod to the Chevrolet model from the 1960s and 1970s that's a clear ancestor of the new Pontiac truck.