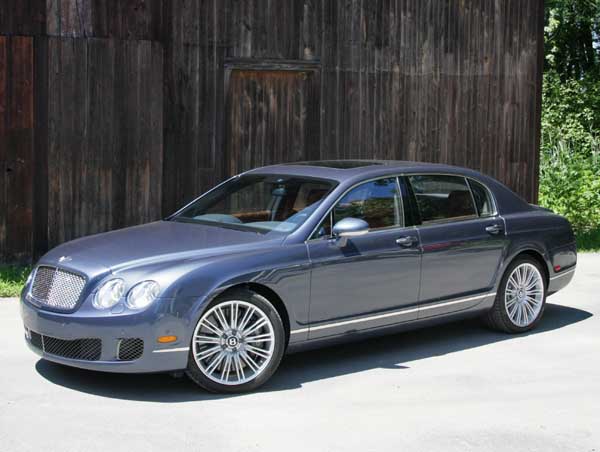 The new Bentley Continental Flying Spur Speed has finally made its formal debut at the London Motor Show.

While some folks simply have to watch from the sidelines, I'm pleased to say I had the opportunity to drive the latest offering from the crew in Crewe, and after a few hours behind the wheel, I must admit, I'm hooked on Speed.

The new sedan moves a heck of a lot faster than its name rolls off the tongue - thanks to an astounding, 600-horsepower version of the Bentley W-12. That's 48 hp more than the "base" speed - if you'll allow that word with a car in this price range - and will launch you from 0-60 in a neck-snapping 4.5 seconds. That's nearly a half second faster than the 552-horsepower version. Top speeds, respectively, are 200 and 195 mph.

Muscle is only part of the equation, of course. The Flying Spur line is designed to be enjoyed from either front or rear seats. The sedan starts out with the same basic platform as the sleek Continental GT. It gets a roomy 20 inches more rear space, yet, kudos to Bentley engineers, adds barely 200 pounds to total weight.

The emphasis on comfort and refinement quickly becomes apparent, with such niceties as the new split rear bench, which can be electronically reclined. Wherever you sit, you'll notice that wind and road noise levels have been cut by more than half, thanks to a new, tri-laminate underbody blanket and the use of side and rear laminated glass.

Front or back, the 2009 Spur remake improves the breed significantly. Visually, there are only a few modest changes, save for the more upright grille and chrome headlamp bezels. On the new Speed edition, there's a smoke-grey grille and slightly lowered suspension.

That latter change is more than cosmetic. Even in the middle setting of its electronically adaptable suspension, the Speed feels solid and well grounded, yet maintains the sort of comfortable ride you expect from an ultra-luxury sedan. Turn it to the full sport setting and the sedan is absolutely glued to the ground. You have to flog this beast hard to realize just how big it is.

During a day of driving through Massachusetts, I pushed as hard as possible, considering the hefty presence of the laser-armed constabulary. Nonetheless, I did find time to nudge up to Autobahn speeds, and even well into triple figures, the Spur Speed managed to deliver an uncanny balance of comfort and sportiness. Charging into tight corners on hilly back roads, the Speed showed the manners of a smaller and lighter sportscar. Yet slow down a bit and it delivered that boulevard comfort you'd demand of a chauffeur-driven limo.

In its first few years on the market, Bentley lagged surprisingly behind on some features one might have expected of a top-line maker. Thankfully, it's largely caught up, with such niceties as DVD navigation and Bluetooth cell phone technology.

For '09, both versions of the Spur can be ordered with the optional, $6,900 NAIM audio package, which delivers 1,100 watts through 15 channels. It is truly a name to remember, delivering what is, to my ears, the best in-car sound on the road.

Of course, that's just one of the options available. Roughly half of all Flying Spur buyers will bespoke their vehicles, with all sorts of special features - down to paint colors designed to match a favorite scarf or lipstick. But before you start specking out your personal package, figure you'll be shelling out a minimum $174,100 for the standard edition and $198,500 for the Speed.