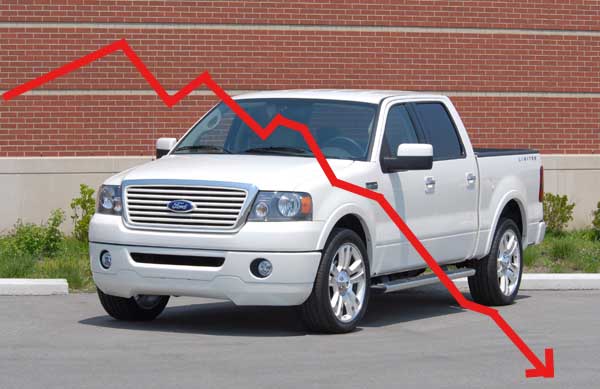 The word is "downsizing," but how far down will Ford go before it hits bottom? With sales of its light trucks drying up and assembly lines sitting idle, the automaker is launching another round of buyouts, part of its seemingly endless series of restructuring plans.

The automaker isn't saying how many more hourly workers it hopes to wave good-bye to this time, but it's likely to be several thousand, according to those in the know.

The question is whether it will also close more assembly plants and other factories. The agreement the automaker signed with the United Auto Workers Union last year limited closures to the 11 Ford had already announced. But like its cross-town rival, General Motors, it is putting pressure on the union to approve further cuts, reflecting the continuing downturn in its sales and market share.

Some plants are being temporarily idled, however, for conversion to new products - such as the Mexican F-150 factory that will resume operations next year, producing the North American version of the subcompact Fiesta. Ford is hoping that as it switches from light trucks to a more European lineup of cars and crossovers, it will be able to stabilize its situation.

But how much further it will fall before then - and how many more jobs it will cut - remains to be seen.