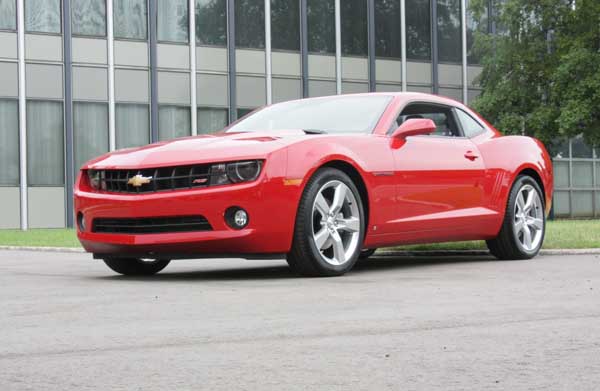 It's finally here - well, almost. After what seemed like an endless wait, Chevrolet pulled the wraps off the production version of the Camaro this afternoon. But if you don't have enough money in the piggy bank, don't worry. The automaker won't start taking orders for quite some months, it turns out.

The first version in what's expected to be a growing family of cars won't go into production until February 16, 2009 - as a '10 model - and it's unlikely anyone will be taking delivery until well into the following month.

But that's not likely to stop all of us on the blogs from wagging our digital tongues, trading opinions about what General Motors designers have done with the jaw-droppingly beautiful show car that proved the hit of the 2006 Detroit Auto Show.

At first glance, you might be tempted to say, "not much." The production version stays just about as true as anything we've seen to the intent of the original concept vehicle, even though GM's global design director acknowledged in a post-reveal chat that "every surface, every dimension has been changed slightly." 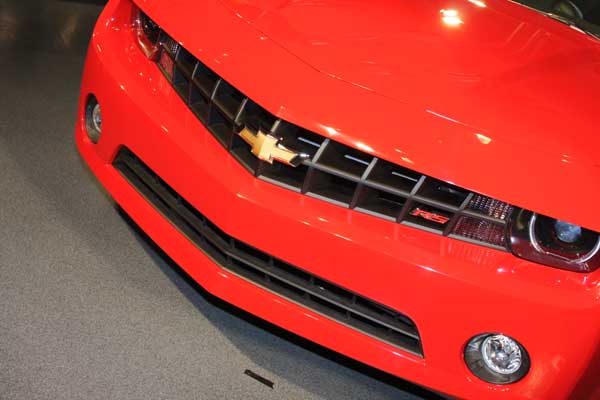 Look closer and you'll notice the taller roof, the larger mirrors, and, as Welburn noted, alls sorts of subtle tweaks. Why risk changing a winning formula? Because no matter how good you get it in concept form, there are always compromises needed to put a design into production. Like headroom. Taking the show Camaro for a drive - as I did, in mid-2006 - was an exercise in contortion, considering my 6'2" frame. No longer. You might not even notice, but for me, the new car is surprisingly roomy, with a backseat that is barely, maybe, almost functional, as well.

Inside, the package maintains the sporty look of the original, with an instrument cluster than commands attention. The slick metal door panels are gone, but Welburn insists they were "theatrical makeup" that would have looked over the top on the production car.

What matters is that all the right curves and angles have been maintained: the short overhangs, the rear fender kick-out, and the large grille, with its deeply inset headlamps. That was a particularly challenging task, Welburn acknowledged, considering the issue of aerodynamics. "It took a lot of work to manage airflow around the front end," he explained, "to maintain the (big) grille and the (sunken) headlight design."

Yet the effort appears to have been worth it. When the V-6 RS, the first version of the Camaro, hits market, Chevy expects it to deliver a hefty 300 horsepower - yet achieve at least 26 mpg. (And in a separate conversation, Chevrolet General Manager Ed Peper confided that by the time the federal mileage numbers are certified, that's likely to go up to a combined 27 mpg, no mean feat for that much power and weight.)

The V-8 version of the RS will start rolling, in February, as well, and the performance-tuned SS will come soon afterward. Beyond that? Expect Chevy to take on Ford model-by-model. 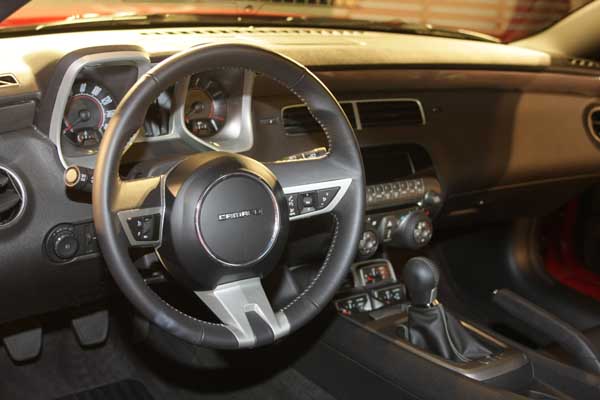 Now, some folks might be asking about the logic of all this. After all, we're in an energy crisis, and even though gas has dipped a bit from record $4-plus levels, there's little doubt that there's been a paradigm shift in market demand. But analyst Jim Hall contends there will always be a market for models that "make you feel good."

Hall expects there will remain a sizable number of buyers looking for performance, despite the price tag. And many of those will be trading down from vehicles that make the Camaro look as efficient as a Prius. And for those who want the looks but might sacrifice the feel of raw power, the V-6 will be a perfect fit, Hall forecasts, adding that over time, that smaller engine will likely account for about 80 percent of Camaro sales.

For his part, Chevy's Peper says there have been 600,000 "hand-raisers" so far, folks who have been lining up on the automaker's Web site and in showrooms asking for the latest news on the Camaro. While that doesn't always translate into direct sales, it's certainly a good sign.

There's little doubt that with the reborn Camaro, General Motors has delivered a solid hit - at least when it comes to looks. We'll have to wait till we drive it, of course, to see if the automaker has truly knocked the ball out of the park.