Ethanol: Gone with the Wind – And Rain and Drought? 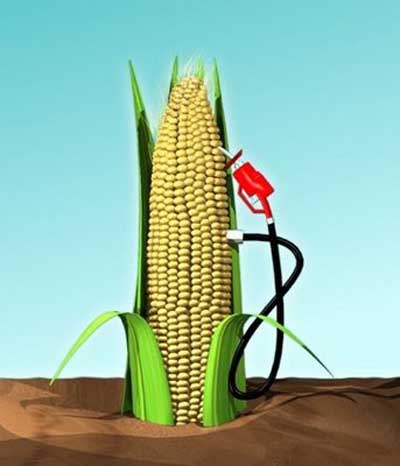 Hurricanes Katrina and Rita gave Americans their first real taste of high gasoline prices three years ago, when they struck the Gulf Coast. Damaging both offshore oil rigs and refineries, the storms disrupted the flow of a quarter of the nation's fuel supply, driving prices at the pump over $3 a gallon for the first time.

While the storms that have saturated much of the Midwest this summer, putting vast regions along the Mississippi River underwater, have had far less of an impact on gas supplies, they have created other serious energy concerns. With corn fields drenched and the growing season delayed or even lost in some parts of Iowa and surrounding states, the price of ethanol, which had hit a $1.50-a-gallon low last September, has nearly doubled.

That's raising serious concerns, particularly among those who connect the dots between global warming and increasingly volatile weather patterns. And that's all the worse, critics contend, with the anticipated expansion in demand for ethanol and other biofuels. How much remains uncertain, but this year alone, global production of the alcohol-based fuel is expected to rise by 350,000 barrels to 1.4 million bbl annually.

"Our energy policy is like playing Russian roulette with every chamber loaded," cautions Lawrence Goldstein, of the Energy Policy Research Foundation, told the International Herald Tribune. "We've doubled up on the weather risk."

Actually, ethanol backers contend, we may have lucked out, as only two of 160 U.S. ethanol refineries were forced to temporarily close as a result of the recent storms. And, they counter, ethanol and other biofuels provide us an alternative to weather and other problems that might disrupt oil supplies.

But there is little doubt that the Iowa disaster is causing proponents to look at the potential problems weather and other issues can create as we look for ways to increase our dependence on agricultural resources. One possible solution would reduce dependence on food stuff for ethanol production.

Indeed, last week, Mascoma, a start-up producer with ties to General Motors, announced plans to set up an ethanol plant in the Upper Peninsula of Michigan. The location may seem out of the way, but the company will make use of wood scraps from the state's forestry industry, using a new process celled cellulosic. A wide range of waste products can be used, and that, in the long run, could help the ethanol industry minimize both the potential effects of weather - and the criticism it has taken for helping drive up worldwide food prices.