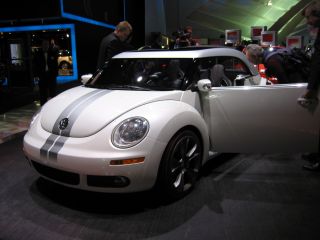 Volkswagen's been working on a new range of compact and subcompact cars for the world market. One of them--according to a report this morning from 4Car--says the new Volkswagen Beetle will be ready in 2011, and will be getting some family members.

The report says the new New Beetle might get a few more body styles than the Coupe and Convertible offered today. Among the new types could be a Speedster version, akin to the Ragster concept that VW showed in Detroit in 2005 (and shown above here), and a small SUV related to Volkswagen's 2000 Dune concept.

The new vehicles would share the current Rabbit's mechanicals but would have some styling elements shared with the Up! concepts that rolled around the auto-show circuit last year. Those cars are due out at next year's Frankfurt auto show.