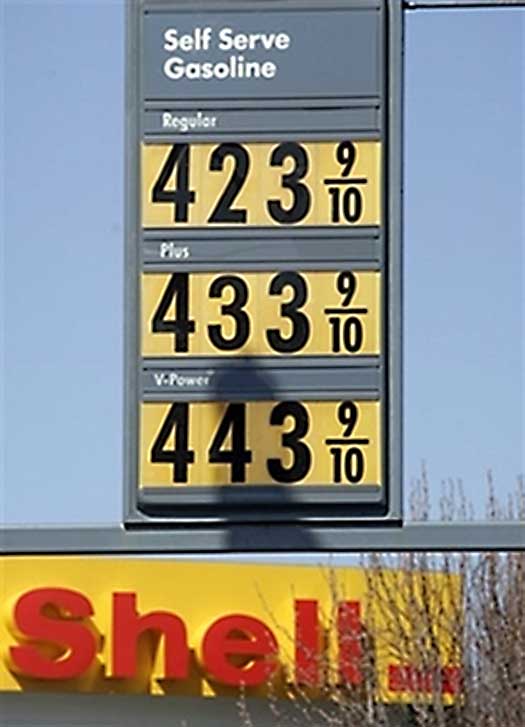 The more you pay for gasoline, it seems, the more you're likely to panic and rush out looking for some quick fix - or so suggest the results from a new survey by CNW Marketing.

Until prices hit around $3 a gallon, there was virtually no impact on consumer buying decisions, the study finds. But suddenly, at $3.25, buyers started thinking about fuel-efficient alternatives.

Among "new car intenders," those getting close to making a purchase, one out of five said $3.25 gas would have them buy a higher-mileage vehicle immediately, while nearly one in three would buy something more fuel-efficient "eventually." With many experts predicting gas will hit $4.50, the impact is far more dramatic. More than three in four would buy a high-mileage model immediately, and more than four in five would switch eventually.

A full 63 percent of the general American motoring public say $4.50 gas will lead them to drive "somewhat less," while 53 percent will drive "significantly less."

According to the CNW poll conducted last month, environmentalism has its price. At $3 or less, essentially no one wanted the government to permit drilling for oil in the ANWAR preserve. At $3.25, however, more than half said the feds should approve drilling. And at $4.50? A full 96 percent said the heck with those penguins and polar bears.

CNW has conducted its survey for several years, and it's clear that perceptions are relative. With $4 gas already a reality, $3.25 seems a veritable bargain. But a year ago, when $2.75 was the norm, consumers already seemed to be panicking. Back then, a solid majority said they'd be ready to trade in immediately if prices hit $3.75. And even at $3.25, most motorists would have been ready to open up the ANWAR reserves.

But there's a growing sense that consumers have finally hit a wall when it comes to fuel prices. Ford marketing chief Jim Farley described May as a "watershed month," and most manufacturers are now preparing major shifts in their product plans, away from big trucks and toward fuel-efficient crossovers and passenger cars. Whether the shift in the public mood will play in favor of those who want to expand offshore and Arctic oil drilling, however, remains to be seen.