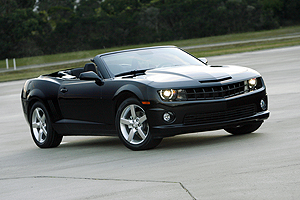 GM's hip with the Friday news--while the rest of the car world is putting down the mouse for the weekend, GM's gone and posted the first rough shots of the 2010 Chevrolet Camaro Convertible.

In a short missive on the GM Fastlane Blog, Chevy GM Ed Peper says the "overwhelmingly enthusiastic" response to photos of the new Camaro made the company want to push out pics of the new convertible. Or in our mind, maybe it's the imminent arrival of the 2010 Ford Mustang and the Dodge Challenger convertible.

Peper confirms the Camaro Convertible will go into production late next year. He also says in the post that the production version could vary from this one--which we're assuming is a high-rent V-8 edition, given the chin spoiler and fog lamps.

Stay tuned as we bring you everything on the Camaro until you get exhausted by it all. 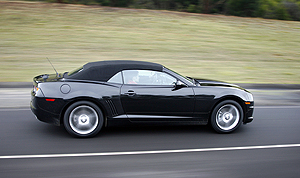