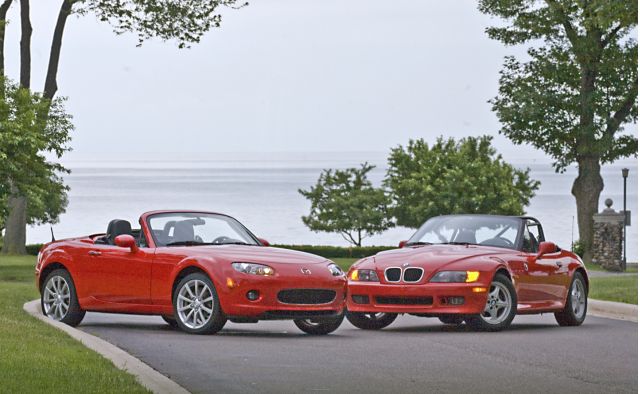 Who among us hasn't wistfully wished for a summer or two with a two-seat convertible? Unfortunately, practicality reigns in most of our lives, and dreams of carefree, open-air motoring with some babe in a flowing scarf remain just a fantasy.

But $4-a-gallon gas changes everything! If you've ever looked for an excuse to by a roadster, now's the time.

Here's the rationale: So you're thinking of bailing on your 14-mpg SUV. We feel your pain…remember, we drive for a living. However, imagine getting 28 mpg. Ah, sweet ecstasy. Now, let's do some math; at $4 for a gallon of gas, compare driving your SUV vs. a high-mileage roadster that gets twice the SUV's mileage. Over a long summer, you could rack up 6,000 miles, saving you more than $800 in fuel just during the best roadster-driving months. The savings are considerable, but unless your wages have been recession proof, it's hard to justify buying a loaded Mazda like ours (MSRP of nearly $30,000) to save $800 per year in fuel.

But--and there are always "but"s when men rationalize getting what they want--there are less costly choices out there. With the 2008 Mazda MX-5 Miata and the author's 1996 BMW Z3 parked next to each other, it became clear that saving money on gas might be the perfect excuse to buy a used roadster.

Sizing the cars up, the roadster formula hasn't changed much in a decade. The MX-5 and Z3 are close in wheelbase and length, with the BMW being a touch longer. Their interiors offer about the same room, with the BMW's actually feeling more spacious. The similarities continue looking at the powertrains and chassis; the MX-5 uses a 166-horsepower 2.0-liter while the BMW came with a 138-horsepower 1.9-liter mill. You feel the extra power. Our Mazda had a six-speed box, but five gears are standard as they were on the BMW when it was new. Even after all these years, the BMW shifts as nicely as the Mazda--there is no substitute for a stubby lever directly connected to moving gears. Both chassis feature four-wheel independent suspensions, four-wheel disc brakes, and standard ABS. As you'd expect, these cars drive like sporty, although after 50,000 on-track miles, the BMW is a bit looser than the Mazda.

Most important for our rationalization, however, is fuel economy. The BMW came with EPA ratings of 23 mpg city, 33 highway. On the road, it routinely delivers a combined 29-30 mpg when you're driving like an automotive journalist. The Mazda's EPA estimates are a more conservative 25/30 mpg, as dictated by the more stringent measurement protocol. Compared to an SUV, these figures prove you could double your mileage with either roadster.

To make the pay-for-your-roadster-with-saved-gas-money approach, a used roadster is the only way to go. Certainly, there are plenty of pre-owned Miatas out there. Ditto for the BMW Z3, which was built from 1996-2002. This author likes setting a spending cap and then finding the best car for that dollar value based on condition and then mileage. Of course, caveat emptor; steer clear of fright pigs, oil leaks, and warm-blowing air conditioners.

Especially in their base forms, neither of these cars will crack off blistering quarter-miles, but they will provide the opportunity to save money on fuel and give you a reason to look for a woman wearing a silk scarf.--Rex Roy

Editor's note: Before the comments start about Roy owning a chick car, his nonpristine example is a well-worn refugee from a defunct driving school that was delivered to him courtesy of Guido the Repo Man after a business deal went ugly. And besides, chick cars don't have SCCA-approved rollbars.