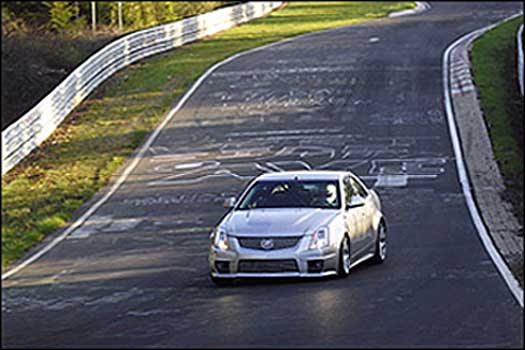 I can't see much through the visor of John Heinricy's full-face helmet. Nor can I move much once I'm all strapped into the molded Recarro seat of a near production-ready, 2009 Cadillac CTSv. But the crinkles in the corner of General Motors' top test driver's mouth tell me we're about to have a good time out on the high-speed test circuit at GM's Proving Grounds, in Milford, Michigan.

"Ready?" Heinricy asks, and he accurately reads the smile on my own, helmeted head as a yes. Slipping the sedan into gear, he strokes the throttle and releases the clutch. We might as well have been shot out of a cannon. The new CTSv shoots out of the gate and into the first corner, which Heinricy takes at speeds I wouldn't have even considered and certainly not dared. We charge through a short straight and into a highly banked oval that makes you feel like you've been caught onto one of those carney whirligigs. I can feel the blood in the back of my eyeballs, but Heinricy isn't even breathing hard--just calmly navigating every move he's making--and how the car is responding.

To sum it all up in two words: amazingly well. The first-generation CTSv was a solid performance car, pumping out an even 400 horsepower and 395 lb-feet of torque. It did a reasonable job up against many of its import competitors, though it also had a couple dismaying problems, like the tendency of the rear wheels to crow hop under a hard launch.

Not so the new v. It's solidly planted and absolutely impressive, as we discovered during an afternoon at the Proving Grounds. Give us some more time and we're bound to find something to complain about--nothing is perfect. But for now, the '09 Caddy CTSv has clearly landed a spot on our wish list.

The supercharged LSA 6.2-liter V-8, a cousin of the Blue Devil Corvette's LS9, makes a jaw-dropping 556 horsepower and 551 lb-feet of torque. You do the math. Both the automatic and stick pull the same acceleration numbers, GM officials claim, which means 3.9 seconds, 0-60, and 12 seconds in the quarter-mile. Top speeds are rated at 191 mph for the stick, 175 for the automatic.

But here's the number that the competition should really take seriously: 7:59.32. That's how long it took Heinricy to make it 'round the grueling Nurburgring, arguably the most challenging endurance course in the world, and certainly a benchmark track. While there may be some debate, this appears to be the fastest-ever time clocked by a production car riding on street tires. Oh, and intriguingly, Heinricy did it with the CTv automatic.

Getting there required a variety of edge-of-the-envelope enhancements to the engine, many of which GM engineers are keeping under their hat until the formal CTSv preview, later this year. But some of the most compelling changes occur further down the drivetrain. The prop shaft and rear differential have, as you might imagine, been beefed up to handle all that added torque. But the solution to that take-off hop problem proved surprisingly simple: an uneven pair of rear driveshafts. We'll spare you the engineer speak, but the new approach now delivers all the power the engine can make right to the ground.

The v's Magnetic Ride Control has also been enhanced, and in Sport Mode, even a pair of railroad tracks couldn't jounce the sedan off-line at 90 mph.

The original CTSv was shepherded in by GM's car czar, Bob Lutz, and designed to help reposition Cadillac as a truly global competitor. Despite the flaws in the first-generation car, it did an admiral job of emphasizing the automaker's engineering prowess. The '09 CTSv should do an even better job. Of course, the question is whether anyone will care.

Regular readers will note that Lutz spends a lot of time, these days, showering praise on more green-minded models, such as the upcoming Chevrolet Volt. But don't think that GM is ready to walk away from performance. No more than Mercedes-Benz will abandon AMG, or BMW its M-series. The '09 Caddy won't generate the sort of numbers likely to shift the sales charts, but it will nonetheless play an important role in the ongoing revival of General Motors' flagship brand.

If the production CTSv matches our initial experience, the competition--and their customers--will be taking notice.