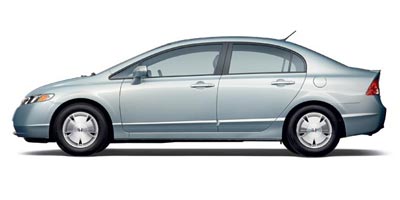 We're a little wary of using the phrase, now that Prince has gone all legal on loyal fans and whatnot. So we'll just quote Ford's Jim Farley, who, when told by the Detroit News earlier today that the new best-selling vehicle in America is a Honda Civic, called it a "sign of the times."

Honda's Civic wasn't the only vehicle to pass the Ford F-Series as the country's best-selling vehicle in May, either. According to the News, three other vehicles also ran past the F-Series in total sales: the Honda Accord, the Toyota Corolla, and the Toyota Camry. Conspicuously, all of them get more than 20 mpg in highway driving and none has a pickup bed.

With more than 53,000 sales in May, the Honda Civic leaped to the top of the charts, even though the Ford F-Series is still the top-selling vehicle for the year so far. But at just under 43,000 units sold in May, it's clear that Ford might have gambled on a quick redesign of the F-Series trucks like GM did last year, when it pulled ahead its GMT900 trucks.

Toyota sales were down 4.3 percent, while Honda posted a 15 percent gain over a year ago. The Civic, Fit, and Accord all had double-digit sales gains over last year.

All of this suggests that the current truck downturn will have lasting effects on the American auto industry. But why are we telling you? You tell us instead--let us know in a comment below if you think the days of omnipresent full-size trucks are toast, and if we're all destined to drive fuel-sippers from here on out. While you're at it, why not nominate your favorite high-fueler car? The most votes will get a virtual shrine set up (well, OK, a blog post) later in the week, once we pay off our gas bill for last month.