Ford Flex: Prepare to Be Entertained 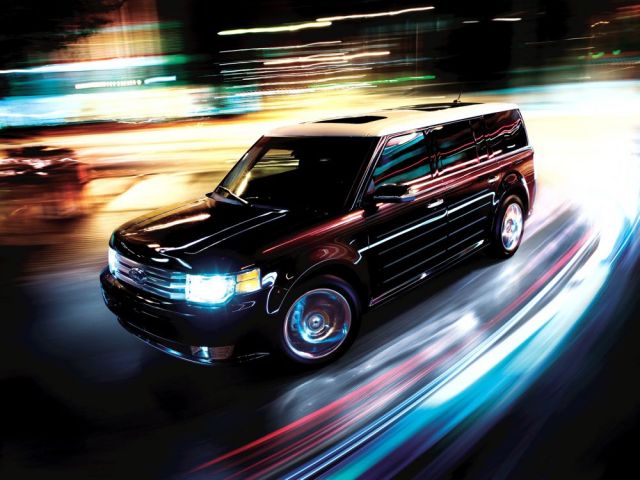 Next week, you'll read a bunch of reviews of the 2009 Ford Flex, once the embargo of June 12 for driving impressions expires. (Of course, here at TheCarConnection.com you can already get the story on the Flex's styling, comfort and quality, safety and features. I had to post it early--my dad keeps inquiring about the "Flex car" and when he can dump his F-150 with my permission.)

Until then you can prepare to be entertained. The 2009 Ford Flex has one of the most impressive interior packages, stuffed with all the in-car entertainment systems you'll ever need.

From SYNC and the in-car refrigerator, to DVD players and the latest satellite-radio services, the Flex's entertainment package is like stumbling into a Best Buy cleverly disguised as a super-sized MINI Cooper. Outfitted to kill, the Flex has a Sony surround-sound audio system; a navigation system with flyover mapping; a 10GB hard drive that stores music onboard and recognizes song titles through Gracenote standards; Sirius Travel Link, which feeds gas prices, traffic data, movie listings, and sports scores into the Flex's center console screen; and ambient lighting like a Virgin America airplane. It also has an in-car photo frame, if you count the nav system's ability to upload your favorite photos and use them as wallpaper.

Granted, the Flex doesn't have Chrysler's in-car TV as provided by Sirius. But my own experience with satellite TV in the car is that it's too much of a distraction for drivers, even if it's just the audio making its way into the front row of seats.

While driving the Flex into the Connecticut suburbs and then back into Manhattan, my co-pilot and TCC contributor Al Vinikour used the Sirius Travel Link service to find out the weather forecast (more rain), some sports scores (damn Braves), and the wind speed on the Sawmill Parkway (from the northeast at 10 mph). Those answers, plus correctly identifying the silhouettes of 10 crossover vehicles (I switched the Durango and Aspen), won me a Sirius Stiletto2 player.

I'm sure many of you out there remember the days when FM radio was state of the art in cars--and I have mixed feelings about the ability to pull in French Open scores when I should be minding I-85. But there's also a big benefit for parents and chauffeurs who need to keep passengers distracted while they go about their driving duties.

So while I'll still be working on Flex driving impressions for June 12, I'll also be entertaining myself with the Blue Collar Comedy channel and Ron White. You can do the same--with the added convenience of a fridge between the Flex's second-row seats. If that's not progress, I don't know what is.