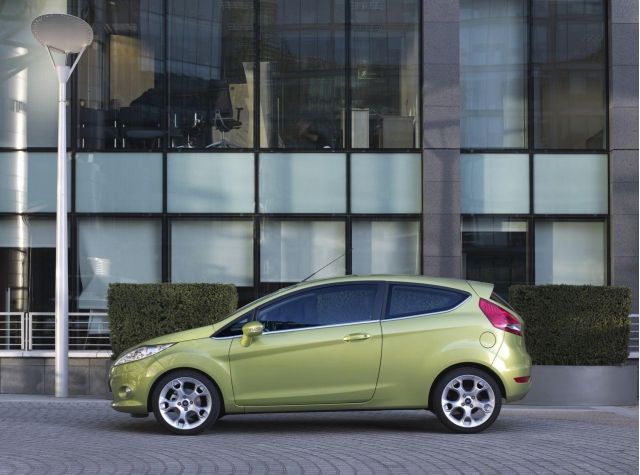 The 2011 Ford Fiesta is on the way--and along with the four-door sedan already in the product plan, Ford's decided to bring along a three-door to the U.S., too.

At this year's Detroit auto show, I talked to Ford's new marketing chief Jim Farley about the future of the Verve concept the company had just unveiled at Cobo Arena. Farley confirmed for TheCarConnection.com that the Verve would go into production - and while he didn't say then that a hatchback version was in the cards, he hinted that the three-door would be a logical candidate for U.S. customers. A month later, we speculated on whether Ford would introduce two-door coupe and SVT versions of the new subcompact.

Now Ford confirms that the three-door version of the new vehicle--the 2011 Ford Fiesta--will join the automaker's U.S. lineup. (We've posted spy photos of the Ford Fiesta sedan recently with the 2010 model year attached, but based on Ford's latest information, I'm pushing it to the 2011 model year.)

The Fiesta lineup will be produced in the Ford plant outside of Mexico City, a blow to UAW organizers who wanted the work to come to the United States. The plant that will build Fiestas beginning in early 2010 will stop building F-Series trucks, in another sign that Ford recognizes how rapidly the full-size truck market is disintegrating. Nearby plants will build engines and transmissions, and in total Ford will invest $3 billion in Mexico for Fiesta production, the country's biggest automotive investment ever.

What do you think of Ford's decision to bring in the three-door hatchback? Tell us in a comment below if you think the Fiesta's the right step for Ford, and if the days of truck dominance in Dearborn are over.