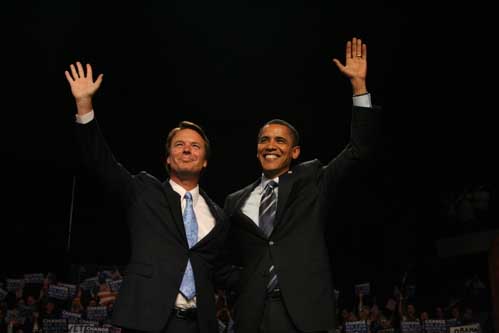 After opting out of Michigan’s contested primary earlier this year, presidential hopeful Barack Obama finally paid a visit – the first of the campaign – to the state. In the process, he picked up a critical endorsement, and set out to replace Hillary Clinton as the Democratic candidate of choice among Michigan voters.

Swinging through Big Three heartland, Obama told a friendly crowd in the Detroit suburb of Warren that he’s ready to enact a far-reaching agenda that includes billions of dollars in potential aid for Detroit’s struggling automakers. “We are taking steps in the right direction, and American automakers are on the move,” he proclaimed.

Among the proposals Obama is considering:

• Spending part of a 10-year, $150 billion clean energy job development budget to assist domestic automakers in retooling to build greener products;
• Diverting part of a $10 billion venture capital fund to further the development of those clean vehicles;
• Doubling funding for a program that the Bush administration has repeatedly tried to kill, the Manufacturing Extension Partnership, which aims to improve efficiency.

“I’m committed to the kind of (government) resources we haven’t seen in decades here in Michigan,” Obama told the Detroit News. The Democratic Party’s likely candidate also tried to back down from comments made in May 2007 at another appearance in Detroit. At the time, it was taken as criticism of the Big Three for failing to embrace the need for better fuel efficiency, and received widespread criticism.

Obama is likely to have fonder memories of this trip. At another campaign stop, he surprised the crowd by bringing out former rival John Edwards, who announced he was endorsing Obama’s bid for the White House – and, in the process, apparently moving himself up on the list of potential running mates, should Obama clinch his bid and receive the party nomination.