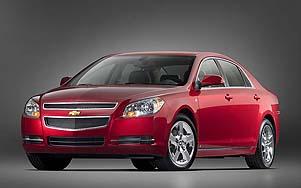 Like the Nissan Altima and Honda Accord and Toyota Camry and Ford Fusion...and...well, like a bunch of other family sedans, the big new Chevrolet Malibu is getting a four-cylinder option on its ritziest model.

The newly dubbed Chevrolet Malibu LTZ will get the 169-horsepower, 2.4-liter version of GM's Ecotec four-cylinder engine. In the Malibu, the engine's teamed with a six-speed automatic transmission that works with it to endow the big family four-door with a 22/32 mpg fuel economy rating. Also appearing on the LTZ version are 17-inch Chrometec wheels and a single chrome exhaust outlet, for carspotters everywhere.

GM's already released pricing on the new model, too. The 2008 Malibu LTZ will sticker at $26,985 including destination charge. The fancy two-tone interior treatment can be had on the four-cylinder LTZ, and heated seats are standard. So are OnStar Turn-by-Turn navigation, XM Satellite Radio and an eight-speaker audio system.