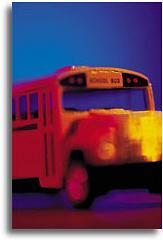 Adult commuters aren't the only ones being stung by higher gas bills. A report from CNN today shows how the rise in gas prices is affecting every pore of the economy -- right down to how our kids are getting back and forth to school.

Take the Dubuque County, Iowa, school system. CNN reports that the diesel fuel costs for the school district have jumped 35 percent in a year. But the district can't cut back on the nearly 5000 miles its buses travel every school day. The tally? An extra $50,000 a year in fuel costs. Another nearby district spent $70,000 more in fuel.

That money has to come from a general fund that would go to other uses -- more computers, additional teaching help, special learning trips. It would pay for two teachers at starting salaries. As Bob Hingtgen, a director with the county's school district, says, "The pie is only so big. If a bigger slice is going to transportation, it leaves a smaller slice for everything else."

In one California school district, CNN says students have to walk farther to catch their buses, which doesn't sound like much of a problem -- but the Paradise Unified School district has canceled three bus routes outright and isn't hiring any bus drivers.

Is there a solution to the budget crunches? Tell us what you think in a comment below.