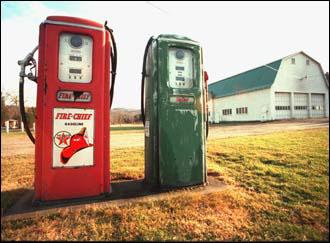 If you've shopped for gas this week, the prices at the pump from just a year ago might seem like the good old days. The nation's average gas price for a gallon of unleaded is up near $3.10 a gallon, according to the biweekly Lundberg survey--and prices are likely headed higher yet, as oil hit a historic high price of $104 a barrel in trading today.

Back in April of 1980, a barrel of oil cost $39,50, the New York Times reminds us. Adjusted for inflation, that's $103.95 in today's dollars. The Times also reports that the dollar is falling to new record lows, which is aggravating the price of oil.

The last time prices ran this high, oil shocks were due to disruptions in supply, for political reasons. This time, it's unslaked demand around the world that's causing the run-up: from China, from India, and from the U.S. too, although in another survey, U.S. drivers actually cut back on the amount of gasoline they consumed for the first time since Hurricane Katrina hit the Gulf coast in 2005.

Oil prices have more than quadrupled since 2000, the Times reports. And relief is nowhere in sight, as the OPEC nations are expected to leave production levels unchanged.

Stay with TheCarConnection.com as we report how much less your dollar is worth than it used to be, as if you need a reminder.