Ford will continue the relentless march of new Mustang variants in 2009 with a new glass-roofed edition of the Mustang that clearly bridges the gap between the current Mustang hardtop and convertible.In 2009 — its 45th year on the market — the Mustang will come in V-6 and GT editions once more, and both will offer the glass roof as a $1995 option. 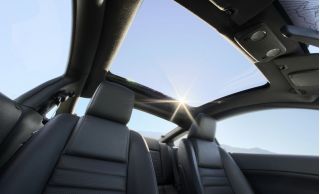 Ford cites research showing longer commute times and higher percentages of sunroof installations as its inspiration for the Porsche-like roof — that, and the data point J.D. Power reports, which has 62 percent of sportscar buyers interested in a sunroof.

The glass itself is tinted for privacy, and can cut UV in the cabin enough to cool the ‘Stang 50 percent quicker than non-tinted glass. A sunshade is built into the roof for sun-scared drivers. Structurally, the glass roof mounts in a frame that’s based on the coupe Mustang. And the glass-roof coupes will be built alongside both the hardtop and convertible in Flat Rock, Mich.