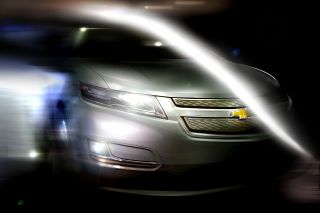 The occasion was GM's annual press preview for the upcoming Detroit auto show.  But, even though the Volt won't be a star at this year's event, GM used the press gathering to keep the PR machine focused on the corporation's green efforts.

We were treated to a behind-the-scenes tour of the E-Flex development center—more evidence of GM's serious efforts behind developing the Volt and other "E-Flex" vehicles (E-Flex is GM's new architecture for plug-in hybrids like the Volt).  Unlike GM's other design studios that work on multiple vehicles at a time, the E-Flex studio is currently working on only one – the Volt.  A team of 45 hand-picked designers, stylists and engineers have been pulled into a wing of GM's advanced vehicle design studio in Michigan to explore themes for its planned range of E-Flex vehicles, the first of which will be the Volt.  We were shown a front corner of a full-size clay model, and GM provided this sketch for us to show you.

GM, along with other car companies from Toyota to Tesla, are exploring the potential of plug-in hybrids, which combine hybrid technology with new components that allow the batteries to be recharged from a wall outlet, improving gas mileage even further. GM says its plug-in hybrids will also be flex-fuel capable.  Bob Boniface, Director of Design for E-Flex vehicles expects that on a full charge, the Volt will be able to travel at least 40 miles without the internal combustion engine ever firing.  Boniface notes, "This means that for many drivers, they'll rarely burn a drop of petrol in their normal driving activities."

"We are now in the midst of a new period of aero exploration," Ed Welburn, GM's chief of design, added in today's announcement. "There has been a significant effort by all our program teams to improve fuel economy and now to extend the range of electric vehicles for the future."  Charts that Welburn showed during the presentation demonstrated the dramatic benefits of slick aero for a vehicle like the Volt.

To help journalists understand how important aero is to the Volt, we were given a tour of GM's massive wind tunnel at the GM Tech Center in Warren, Michigan.  Capable of creating wind velocities of over 130 mph from its 42-foot wooden fan blades, we experienced a low-speed smoke-test demo of a 1/3-size model of the Volt.  Although the model was camouflaged with all different types of duct tape, we could clearly see the four-seat vehicle's roofline.  Compared to the flat-roofed concept, expect to see a more rounded roof that seems similar to the Toyota Prius.  The scale model also sported a longish spoiler off the rear deck to help better manage aerodynamic drag.  While the design rendering released by GM showed a solid grill, the model in the wind tunnel had the lower grill portion open, leading us to believe that the grill openings are thermostatically controlled.

While the tape effectively concealed much of the Volt's shape in this early stage of development, we could discern the outline of the greenhouse.  The striking "Z" shape behind the door mirrors seems to have been retained, but the extension of the door glass below the beltline probably won't make production.

The sketch above is "one of the design themes" that the company is refining as it pushes the Volt to production as early as 2010, as GM has alluded to in past press releases.--Rex Roy and Marty Padgett