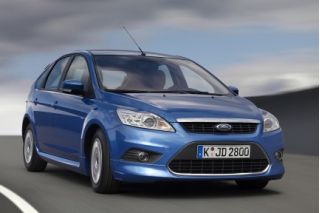 Ford continued its roll-out of new small vehicles with the reveal of the new Ford Focus wagon at the Bologna Motor Show, which hosted a few international debuts in the waning days of the 2007 auto show season.The new Ford wagon carries through the "kinetic" design themes used in the Focus that was unveiled to generally favorable reviews in Frankfurt, Ford officials said during the press previews in Bologna, which is one of the largest shows held Europe, drawing more than one million visitors annually.

Ian Slater, Ford vice president of communications, said the Focus wagon is an important vehicle for Ford of Europe because it is expected to account for a substantial slice of sales -- more than 25 percent of sales in markets such as Germany, where wagons are especially popular. The wagon version of the Focus is expected to go on sale in most European markets in the first quarter of 2008, Slater said.

With fuel prices rising around the globe, Ford is putting a renewed emphasis on small cars. Since September, it has unveiled two B-class concept cars, one in Frankfurt and another at an auto show recently in southern China. A third Verve concept vehicle will roll out at the North American International Auto Show in Detroit, Ford officials said.

Given the weakened state of Ford's finances, the new design direction embodied in cars such as the Focus wagon and the Verve are absolutely critical to the company. Fresh designs have helped Ford of Europe gain sales this year, Slater noted.

The Bologna show also played host to a number of other introductions, including a HUMMER H3 Black Edition and the Porsche Boxster RS60 Spyder, which will be produced in limited quantities. Fewer than 2000 units will go into showrooms worldwide, Porsche officials said.

By and large, European carmakers, judging from the remarks during the Bologna show, are cautious about 2008. The turmoil in financial systems has undermined consumer confidence in key markets such as the United Kingdom and Germany.

The other big theme during the show was green technology. The European Union, which has basically assumed responsibility for automotive regulations across Europe, is proposing strict new controls on automotive CO2 emissions, which is in turn forcing carmakers to use more fuel-efficient but more expensive engines such as turbodiesels.