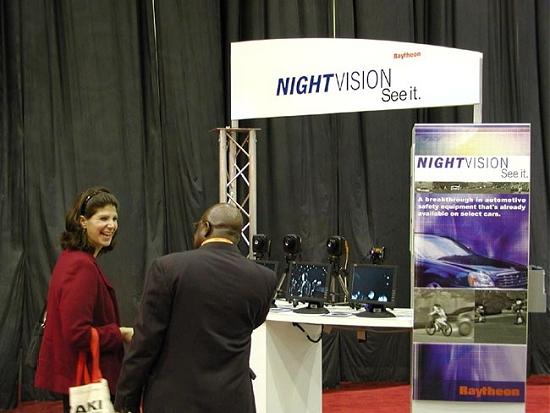 I have to admit that up until now, I’ve always thought of Night Vision systems as one of those features that are offered mainly to satisfy leading-edge technophiles—those who want to be the first on their block with a particular gadget, rather than to actually provide a tangible benefit on an ordinary evening out. They were perhaps the mythical “X-ray specs” of the automotive world; you were the envy of everyone in having them but…um…ya couldn’t really see anything special.

That skepticism was only heightened after a lackluster experience, a few years ago, with the system that Cadillac offered earlier this decade. Cadillac first introduced the first in-car night vision system on the 2000 Cadillac DTS. Although the infrared-based system used sophisticated, military-proven thermal imaging technology from defense supplier Raytheon, it left something to be desired in the real world. In theory, the system would project—via a head-up display—an enhanced, black-and-white “negative” of warmer obstacles ahead that had higher surface temperatures, such as people, deer, or pets.

But in practice—as anyone who’s been frustrated with a head-up display can attest to—there can be a lingering double image at anything but straight ahead, and if the driver happens to be seated in a slightly different position—such as during accident avoidance—the image can be out of view. Furthermore, some older drivers had anecdotally complained that it was difficult to keep changing focus between the night projection and the true view ahead. After a lot of excitement that first year from technophiles, orders of the system dwindled before GM eventually discontinued it in 2004.

Beginning last year, Mercedes-Benz rolled out a new night vision system called Night View Assist on its flagship S-Class sedans, and it’s now also offered on the CL-Class coupes. The system takes a new approach to night vision, using infrared projector beams built into the headlights to cover the road ahead, along with some of the periphery, with (invisible) infrared light. Then a windshield-mounted infrared camera receives a constant image when the system is turned on, displaying it in high-resolution black and white on the eight-inch display that is the instrument cluster. Flick on the night-vision system with a button next to the headlight switch and the faux-analog speedometer dial disappears, replaced by a brighter, sharp night view of the road up to 500 feet ahead.

BMW is now also offering a Night Vision system on several of its models, which it says, extends night vision by up to 1000 feet. The system uses so-called Far InfraRed (FIR) technology that’s more comparable to the thermal-imaging system in the Cadillac—which the automaker says is better at picking out people and animals—and displays the results on the iDrive screen in the center of the instrument panel.

Recently, I had the opportunity to test Mercedes-Benz’s different take on night vision systems with a drive in the high-lux CL550 equipped with the Night View Assist on some nearby dark, curvy roads up in the hills above the city, and really feel out the system. At first, it’s a little distracting to look down, and at first you have to fight the urge to “drive by the camera,” but it’s right in front of you, just like glancing down at a gauge cluster. Once you’re used to it, the system truly becomes a second set of eyes for driving along the darkest roads, helping pick out the all those special details in the night. It’s a bit like using polarized sunglasses in the daylight; surfaces look a little different and differences in contrast between objects ahead are easier to pick out. And unlike the Cadillac head-up system, if you happen to be reaching over for your coffee you can still maintain a good view of the screen.

The system unexpectedly redeemed itself near the beginning of my drive, when I’d just switched on the system and was climbing up a series of tight and steep switchbacks. Suddenly racing around a corner, and sliding partially in my lane, was the first of a group of daredevil streetlugers bombing down the hill, their backs on boards, with only small blinking headlights, much faster than I was ascending it. Without the Night View system it might have been a close call, but the screen’s knack at highlighting edges helped me pick him out quickly and almost bring the car to a stop so he could get safely around the corner and back in his lane.

All said, I’m a convert. X-ray specs were a comic-book fantasy; Night View Assist is for real.—Bengt Halvorson

First drive: The 2021 GMC Yukon weathers Hurricane Sally
Comments (0)
Commenting is closed for this article
Contribute
Send us a tip Comment Contact the editor
Follow Us