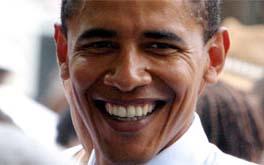 Presidential candidate Barack Obama is making his way down the road of fully evolved campaign positions. Today in Detroit, he revealed he's no friend of American automakers - and seemingly, unsympathetic to their calls for a level playing field.

Obama, the New York Times reports, told Detroit audiences that, essentially, their problems were entirely of their own making. “For years, while foreign competitors were investing in more fuel-efficient technology for their vehicles, American automakers were spending their time investing in bigger, faster cars,” he said, according to a text of his remarks. “And whenever an attempt was made to raise our fuel efficiency standards, the auto companies would lobby furiously against it, spending millions to prevent the very reform that could’ve saved their industry.”

Obama's promising campaign is running into a ditch here. He's falling into the trap of what companies "should" do versus what pays their bills. For years, when fuel was cheap, Americans wanted minivans and trucks. It would be hard to rationalize millions of Caravans, F-Series and Silverados for any other reason. From what we recall, Civics and Tercels were widely available to the public - yet American drivers chose Suburbans instead.

And in extrapolating those strengths into today's weaknesses, Obama oversimplifies the dynamic of what's going on with GM, Ford, Chrysler and Toyota and Honda today. The Japanese didn't build a 35-percent market share in the U.S. solely on Civics and Yarises - Toyota's Lexus franchise is heavily dependent on the RX crossover for sales volume, while Honda's Pilot is one of its new mainstays, along with the not totally frugal Accord and the Civic. The Japanese are evolving to fit our market, not the other way around, a halo Prius or Insight notwithstanding.

There's history here that Obama would be well served to understand before he joins the fray calling for the obliteration of America's truck industry. Japanese cars come from a nation bred on nonexistent domestic energy supplies, restrictive taxes on consumption and paralytic traffic. Whether America is headed down the same road can be argued - but what we have today, and what Obama dismisses, is an industry foundation built around larger cars and trucks and a country built on and by them.

Obama drives a Chrysler 300c, putatively, but has he ever been in a Chevrolet Aveo or a Ford Focus? American automakers have fielded strong subcompact cars that did well in the marketplace. But their core competency is in bigger vehicles. There's no sin in creating, or in driving a large SUV if it's appropriate for the task.

There's a large helping self-loathing in the constant catcalls at Detroit these days. American companies are in the gutter because of their own misdeeds, goes the rationale. It isn't so. History has caught up with Detroit - but unfairly, today's American automakers are tagged with mistakes made three decades ago. And once the perception was welded into place, it's become impossible to counter. The construct now is Japanese cars and companies are better and more efficient - as Obama would have you believe - and no matter what Chrysler or Mercury or Buick does, it's almost impossible to argue to the contrary.

Detroit doesn't deserve to be hammered again by a ham-fisted campaign season and another rush into CAFE-style legislative mismanagement of the auto industry. And in what's effectively an election year, Obama doesn't need to boost his poll numbers with reflexive Detroit-bashing.