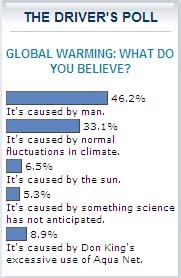 “Typical right-wing propaganda. Is it any wonder you don’t allow talkback on this site?”

That’s the most recent, but not the most vehement letter we’ve gotten regarding some of our coverage on the intersection of cars, the environment and carbon dioxide. Half our letters slap us on the back for telling “the real story” – while the other half smack us in the ass for getting it “totally wrong.”

(At least they’re not as bad as one reader who disliked a phrase in our Shelby GT500KR piece. “You should give consumer reports a call for a job and write about dog shit and let every one know what taste the best,” wrote the Boeing employee who emailed us on his company account (!) and whom we will protect despite his antisocial tendencies.)

Here’s the latest thorn in the paw of global-warming enthusiasts—I say enthusiasts because often, they’re so proud to be “right”—from our letters section:

Politics and cars are irrevocably married now. And usually, "debates" aren't over until scientific proof - not circumstantial hysteria - is offered. What if the sun is causing global warming? What if it is man? Can we really fix it? Prove it's not the sun - or even merely cyclical climate change - and we'll start pedaling everywhere.

That graf caused such an outrage, we decided to poll you. And so far, our readers are split right down the middle. This snap poll (still running on the TCC homepage) shows just under half think global warming is our fault. The other half thinks other things (apologies to Don King). Admittedly TCC’s audience is skewed toward industry professionals - but at the same time, they’re also likely people with more than press-release knowledge of the subject.

Our editorial take - not unanimous by any means - is that no one really knows what causes global warming, and we need to be very sure about it before we hack at the foundations of our economy. The questions are multiple and manifest, one of our contributors reminds me: “I'm a skeptic in the sense that I don't deny that global warming is happening, that human impact may be influencing global temps, or the relationship between CO2 and those temps, but I feel like our own CO2 emissions could just be a small part of what's going on, and CO2 might not even be the only factor. What about other human impacts like deforestation, large-scale agriculture, and diverting water resources? There's just a lack of a common-sense all-things-considered approach and too much mutual head-nodding; that's what irks me.”

TheCarConnection.com is going to tackle global warming as best we can. In the coming weeks we’ll bring you the case for—and against--global warming. We’ll research, cite sources, and try to boil it down to a digestible story that gives you information to decide whether the case is really closed. Or if it’s a hypothesis whose proof is yet to come.

Have Carmakers Lost the CO2 Argument?—TheCarConnection.com