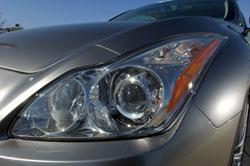 Infiniti says its New York auto show stand will sport a pair of new vehicles--and one will be the Infiniti G37 Coupe, formerly the G35, which would seem to get an engine upgrade along with revamped style.

The other vehicle will be an EX Concept, likely a forerunner to the next range-topping Infiniti sedan. Infiniti promises "technological features that are expected to make it to a production vehicle – for the first time ever – by the end of the year."