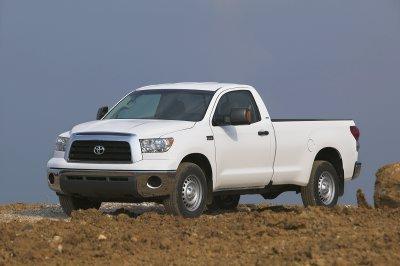 In a nationwide offering, Toyota dealers are putting $1,500 on the hood of the new Tundra to woo buyers out of their F-150s, Rams and Silverados.

The Wall Street Journal says that the Texas-built truck is benefitting from the one-month program, which applies only to the work-truck versions of the new Tundra. It's a clear effort, the paper reports, to pry loyal pickup owners out of the domestic trucks.

The interesting point of the article is that Toyota is targeting buyers with bad credit or those upside-down on their current trucks with the new offers. Basic truck buyers tend to be in one of those two camps, a Toyota rep told the paper, and the $1,500 could help them get into the new truck.

the Journal also reports there is some concern in the company's Japanese headquarters that the target of 200,000 sales can be met, with the downturn in the housing market - which has seen large numbers of marginal-credit buyers default on their loans.