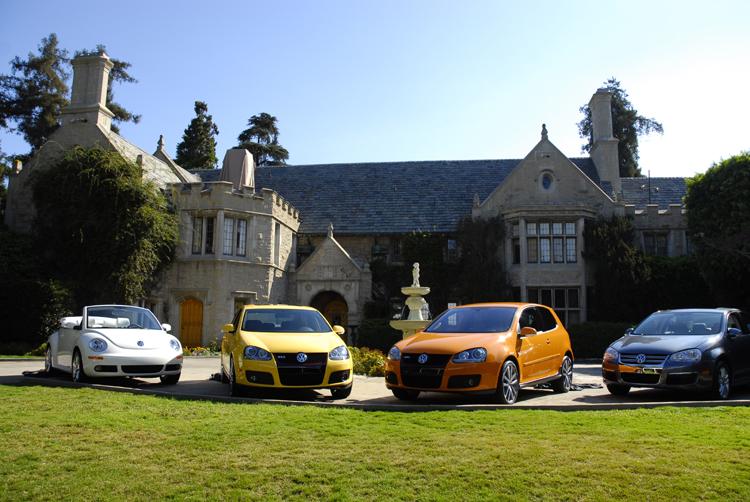 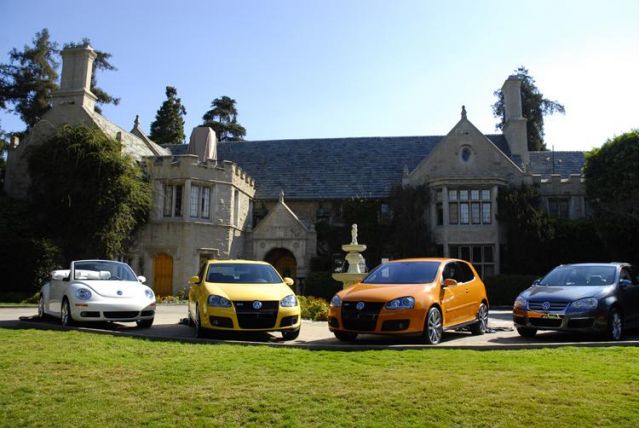 “Financially prudent” rather than Rabbit meets Bunnies is how Volkswagen explained its decision to unveil four Limited Edition models at the Playboy Mansion October 4, but prudent is hardly the word to describe the recent shenanigans involving the iconic Playboy trademark.

During a week when the new Playboy Club opened in Las Vegas and bratty heiress Paris Hilton was downed by a knockout punch from former Playmate Shanna Moakler, Volkswagen brought its own bunny Rabbit to Hugh Hefner’s Beverly Hills romper room. Just as well. There was nary a Playmate in sight, and the 22-room home for Hugh Hefner and his three girlfriends was closed up tight as a drum. Hugh had fled, it seems, to Sin City, taking every cottontail with him.

Not to worry. With rows of white stacking chairs under a white tent on the front lawn, as if for a wedding, the black crepe-shrouded Wolfsburg Edition Jetta, Fahrenheit GTI and GLI, and the Triple White New Beetle convertible that matched our chairs, gamely substituted. The lone bunny, albeit a mechanical 2007 Rabbit, reposed discreetly nearby.

It was difficult to focus on the unveiling of the dazzling new special edition Volkswagens because the mansion’s blinds were primly drawn, its leaded-glass windows blank, and the crenellated roof and corner towers loomed overhead, leading one to wonder: Had Jane Austen moved in?

But then the guitar music started rocking and Volkswagen’s mojo was back. The guitarist’s electrical cord snaked inside a Rabbit and plugged in to the car’s auxiliary jack. Nice gimmick. Must have woken the whole neighborhood.

But wait! There’s more! VW is giving every buyer of a 2007 Rabbit and Jetta model during the last quarter of this year, which is like, right now, a free electric First Act GarageMaster guitar. Result: you can play the instrument while parked in your garage, or, indeed, parked anywhere, using the car’s audio system. Each guitar is engraved with the VIN number, while the car’s steering wheel is engraved with the Limited Edition number, from 1-1,200. So it was a wedding of sorts, a collaboration between music and mechanics, turning Volkswagens into mobile amps.

Appealing to the youth market with a guitar that boasts an analog modeling technique to emulate vintage amplifiers, a V-dub inlay, VW logoed picks, and switches to create a clean, dirty, or lead guitar sound, each car becomes a concert hall you can drive to the desert, mountains, or beach.

The Playboy Mansion’s zoo and aviary are still in full working order but the famous grotto out back, the koi ponds, and the mammoth futon, which we were warned not to touch, were deserted. Left to their own devices were a parade of pale pink flamingoes, dozens of peacocks, and exotic birds.

Exotic, too, are the colors of two of Volkswagen’s Limited Editions: the startling orange Fahrenheit GTI and the searing yellow GLI. The GTI high-performance hatchback has a European sport-tuned suspension, 18-inch alloy wheels, heated leather sports seats, a sunroof, and DSG boot, brake handle, and steering wheel. On sale in November, the price is $27,665. The GLI is similar, with a manual transmission version for $27,880, and the automatic priced at $28,995.

The Wolfsburg Edition Jetta with manual transmission is the lowest-priced of the four specials editions, coming in at $19,360. With a sun roof, leatherette seats, a cold weather package and what Volkswagen calls ‘monster floor mats,’ the Jetta offers automatic transmission for an extra $1,075.

Costing $25,990, with automatic transmission only, is the Triple White New Beetle limited edition convertible. Approximately three thousand will be in showrooms April 1, just in time for the bunny hunt. Maybe this time there’ll be a few two-legged versions around.—Jill Amadio