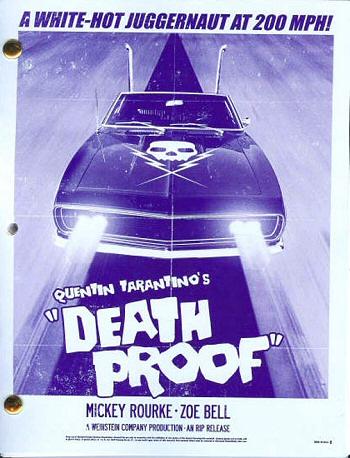 This year brought you Pixar’s Cars, a sappy kidfest lowlighted by an animated Larry the Cable Guy. Next year the car world gets considerably more adult fare tossed its way at the Cineplex via Grind House, a double-bill splatfest coming your way from Robert Rodriguez (Sin City) and the hyperspoken Quentin Tarantino. It’s Tarantino’s half of the project that play to gearheads: in Death Proof, he directs Kurt Russell and Rosario Dawson (Rent) through the story of a stuntman who uses his musclecar to stalk and terrorize women on the streets of a fictional town. Filming now in Austin, Death Proof shares the double bill with Rodriguez’ Planet Terror and some fake movie promo reels. Details are leaking out all over the great movie sites like Ain’t It Cool, so click here to see some great pics of the Death Proof car and prep yourself for a spring release that could be as cool as Steven Spielberg’s Duel—or maybe as turgid as Tarantino’s Four Rooms. Either way, it’s better than the next Harry Potter, right?