Danica: Fast At “The Right Time of the Month?” 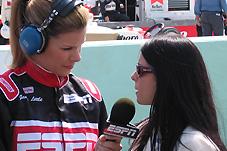 With Danica Patrick openly exploring a move to NASCAR, fellow IRL driver Ed Carpenter thinks success lies ahead for the young female star — depending on her lunarity. Carpenter, four places behind Patrick in the IndyCar points race, said in a radio interview that Patrick could be a good NASCAR racer. “I mean, you know especially if you catch her at the right time of the month, she might be trading plenty of paint out there,” Carpenter said moments before tasting his own toenails. Have some sympathy on him, feminists: The poor bastard will probably be known forever now on ESPN as Ed Carpenter, Period. For the record, Patrick herself laughed it off in a class act, simultaneously proving she’s ready for NASCAR’s media machine.