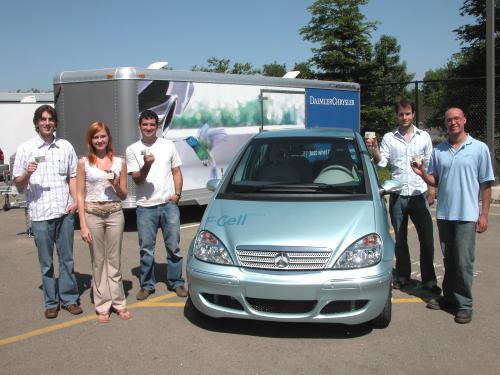 DaimlerChrysler let some driving students in California take the test in fuel-cell cars. In a related story, most of TCC's staff took their driving tests on horseback.

Scion, says one insider, is a "mile deep and a foot wide." So, does that make Chery a hectare tall and two millimeters around? Does BMW have a small diameter? Remember when you didn't have to know dimensional analysis to read the news?

Can we suggest theme music for the latest Nissan-Suzuki tie-up? It's a toss-up between the Marvin Gaye classic "Let's Get It On" and the horrible opening music for the horrible '80s sitcom Small Wonder. Either way, the Robot is the appropriate dance.

May sales: Toyota repeated its third-place ranking over DaimlerChrysler, leading the mainstream media to speculate that Toyota will eventually move past GM in annual sales - a story we've been following since, um, 2001. Mazel tov!

Ford's Atlanta plant and GM's Oshawa line top the Harbour report for productivity-and concurrently, the list for closure. Chalk this one up to real irony, kids, not fake irony Alanis Morrissette-style bummers.

A Nissan marketing exec says the big Internet portals are just as effective as broadcast TV when it comes to snaring eyeballs. Stop! You're making us blush! Oh, just sign the check already.

And finally this week, our readers chose the Corvette Convertible as the vehicle most likely to inspire outbreaks of Grease. In even better news, our publisher has turned down the offer to play Rizzo in the inevitable revival.