Toyota Makes the Move into NASCAR 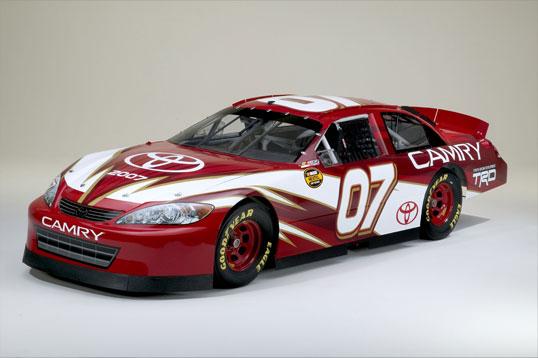 In a press conference held at NASCAR’s Research and Development Center in Concord, N.C., this afternoon, Toyota announced that it would be accelerating its NASCAR program with entries in the Nextel Cup and Busch Series utilizing the Camry model beginning in 2007.

The announcement was made by Dave Illingworth, senior vice president and chief planning and administrative officer for Toyota Motor Sales, USA.

“Next year – 2007 – will be a special year for Toyota in more ways than one,” said Illingworth. “Toyota will be celebrating its 50th anniversary in the United States, and we will be joining the NASCAR Nextel Cup Series, America’s premier racing series. Toyota has been an important part of the U.S. motorsports community for almost 25 years. We’ve competed and won in different series and on tracks across America. Toyota drivers and teams have won championships in a variety of different series. But, if you want to compete against the best, in America that means NASCAR.

“We look forward to February of 2007 when the green flag waves to start the Daytona 500 and the starting lineup features the Toyota Camry.”

Toyota has been competing in NASCAR since 2000, starting out in what was then known as the Goody’s Dash Series for four-cylinder sedans, winning its first race in 2001 and capturing the series championship in 2003. The company moved up to the Craftsman Truck Series in 2004, where it has noticeably contributed to raising the competitive level of that series. Toyota has been racing in America for 24 years, having competed and won championships in IMSA, CART, IRL and off-road racing. Their trophy shelf includes coveted hardware from events including the Rolex 24 at Daytona, 12 Hours of Sebring, the Baja 1000 and the Indianapolis 500. Toyota is also currently competing in the Formula 1 World Championship.

The company, as the first Japanese-owned firm to compete in what has traditionally been an all-American series (if you overlook the fact that Dodge is now part of the German-owned DaimlerChrysler empire), is sensitive about wanting to be welcomed into the “NASCAR family” and not alienating any fans. Illingworth took pains in his announcement to point out the many manufacturing plants located in America, the number of jobs created by Toyota and the millions of cars and trucks that are constructed on these shores.

Illingworth was welcomed by NASCAR CEO Brian France, who joined him in unveiling a Nextel Cup Camry. Illingworth said that, unlike the Craftsman Truck Series, no Nextel Cup or Busch Series Toyotas will have Toyota sponsorship, and that the manufacturer support will be on par with what other manufacturers currently provide in the Nextel Cup and Busch series, with no vehicles being engineered and/or built by Toyota Racing Development, as was the case with their entry into the Craftsman Truck Series.

Toyota will host a media event at Lowe’s Motor Speedway on Tuesday night, at which time some of the teams and sponsors who will campaign Camrys will be introduced.--John Gardner