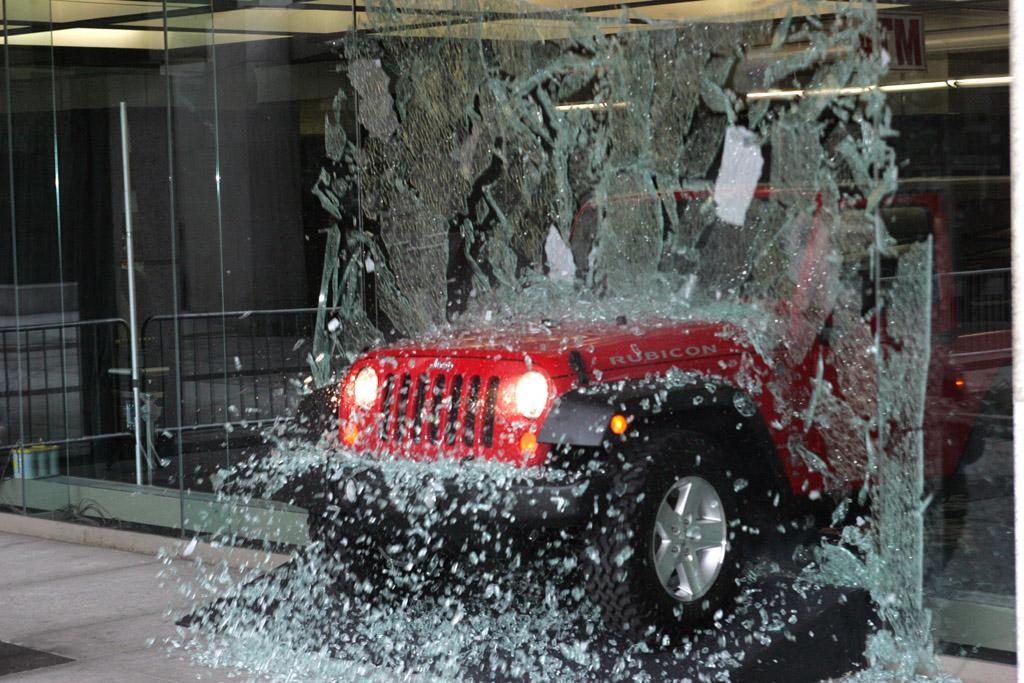 With a deafening crash, the 2007 Jeep Wrangler made its world debut at Detroit's Cobo Hall the other day. Smashing through a pane of plate glass, the spectacular preview brought to mind the launch of the original Jeep Grand Cherokee, when former Chrysler President Bob Lutz drove through one of Cobo's walls of glass and onto the Jeep stand.

Ever since that theatrical "reveal," Chrysler has built a reputation for staging some wild and outrageous, and yes, must-see product introductions. The Dodge Ram literally dropped in on unsuspecting journalists from a hiding place in the ceiling. Chrysler introduced the second-generation minivan by catapulting it over the heads of Lutz and former CEO Bob Eaton.

Of course, it doesn't always work, as when another Chrysler debut the headline writers ignored the new models, focusing instead on the body-painted nudes helping recreate several classic paintings. This year, the first of three Chrysler previews fell flat when Desperate Housewives star Eva Longoria forgot her one and only line. But the automaker redeemed itself on Tuesday, with one of the best show biz moments in memory, unleashing a blizzard of confetti before rolling out its new Chrysler Aspen SUV.

The automaker's PR chief Jason Vines, also a stand-up comic, makes it look easy. It's not, as plenty of Chrysler's competitors have discovered over the years. General Motors has had some of the most egregious failures. It tried a bicoastal magic act for the launch of the last-generation Corvette, a routine that ran long, even in an hour time slot. Not-so-funny guy Ron Zarrella, GM's former marketing czar, earned little more than nervous titters when he did his version of Mister Rogers, a few years later. And this year's debut of the Buick Enclave was both pompous and boring, to be blunt, with 20 minutes of chatter about quality products like guitars and bicycles, and virtually nothing about the car itself.

The Camaro launch, a day later, also teetered on the edge. It began with a blaring high school marching band, and was followed by a procession of classic Camaros, all narrated by two hired guns from ABC Sports. It might have been too much had it not been for the new Camaro itself. Of course, that just underscores how important product is, with or without the brass band.

There was, ultimately, just one old-fashioned news conference, with company officials fielding questions from the assembled media. But then again, it was Geely's first-ever appearance at the Detroit Auto Show. Give the Chinese automaker a little time and they're bound to figure it out.