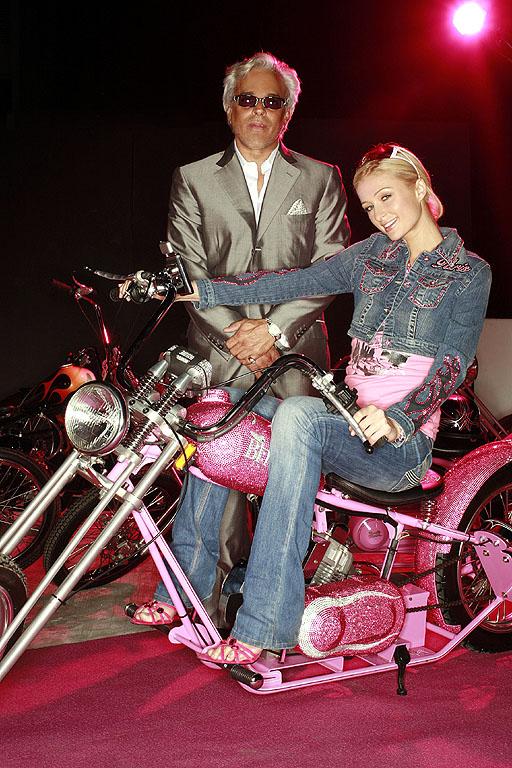 In the reality-TV “garage” genre, the stupid-expensive custom bike reigns supreme. The Teutels might be the most media-savvy of the bunch so far, with their Orange County Choppers and bikes made out of copper from the Statue of Liberty. But the dark horses at Beverly Hills Choppers are trying to trump them with a single PR stunt worth $250,000.

The west-coast crew’s quarter-million PR pitch is a custom chopper that now belongs to press vampire Paris Hilton. You know her last from a minor scrape in her Bentley Continental GT captured on widely circulated Internet video and, well, other widely circulated videos. The Beverly Hills Choppers squad built the bike for Hilton and as a pitch for a new reality show, Son of a Gun, being shopped around town.

The stats? The bike’s encrusted with more than 100,000 Swarovski crystals — basically, rhinestones — that also spell out “Paris” on the bike’s gas tank. The tank cap doubles as a compact mirror, we’re told.

Fittingly, the six-hp, two-stroke bike hits 70 mph in a single forward gear — fast enough to avoid paparazzi on foot, slow enough to not miss a single storefront on Rodeo Drive.

We applaud the PR moxie of Johnny Lew Fratto and his bike outfit — and simultaneously kick ourselves for buying into the Paris Hilton glitterati car wreck. And we now return you to your regularly scheduled programming — which won’t include The Simple Life, if we can at all help it.