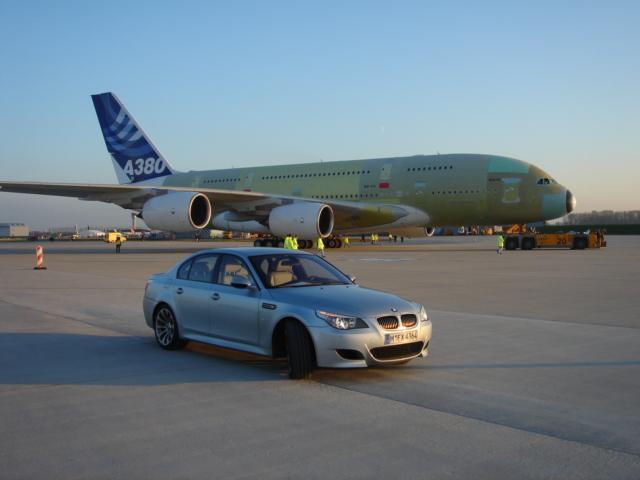 As one of sixteen European plants that contribute to the production of the Airbus A380, the factory in Hamburg, Germany finally welcomed a completed prototype of the massive new double-decker flagship to its Finkenwerde airport base on Tuesday. Scheduled to go into service in November of 2006, the 276-ton super jumbo jet, outfitted with four Rolls-Royce Trent 900 engines, made a picture-perfect landing after its maiden flight from the planemaker's Toulouse headquarters that was cheered by thousands of faithful onlookers, most of the 9,900 Airbus employees and dignitaries.

While the lions share of the invited guests and VIPs were either bussed in or ferried across the River Elbe from the city-centre, TCC's Hamburg-based contributor Farhad Heydari arrived in a loaner M5 and was promptly escorted onto the tarmac. He drove the silver-colored 507-horsepower V-10 M5 and parked it solo, where it was later joined and dwarfed by a taxiing A380. Following the nearly two-hour long ceremony, Heydari, to the delight of Airbus staff, put the M5 through its snarling paces on the runways and pristine taxiways of the Finkenwerde airport.

Moments after completing his laps, an Airbus A321, ready for delivery to Air China, displayed some real muscle, when test pilots used the very same runway for a full throttle and brake test without taking off. It just goes to show: in Germany one is always out horsepowered.