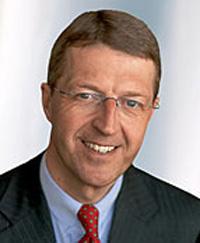 Sources say that Ford chairman and chief executive officer Bill Ford has been looking at former Mercedes-Benz chief Eckhard Cordes to fill a senior post at Ford with the idea that he would be a candidate to succeed him as CEO.

Cordes lost out to Chrysler CEO Dieter Zetsche to succeed retiring Juergen Schrempp at DaimlerChrysler. When the announcement was made, Cordes made it clear he did not want to stay at DaimlerChrysler, feeling he had lost the confidence of the supervisory board at DC.

Ford is known to have unsuccessfully courted both Zetsche and Nissan-Renault chief Carlos Ghosn to be his successor. Either of those executives could have walked into Ford as CEO, but there is a feeling among Detroit’s top wags that Cordes, besides not being wild about being second choice after Zetsche, couldn’t walk in as CEO, which is what he wants. He doesn’t have the credibility industry-wide to take over from Bill. And his somewhat petulant exit from Daimler gives pause to some at Ford who see him as a potentially divisive character in the mold of Jacques Nasser and Wolfgang Reitzle.—Jim Burt

Review update: 2022 Volkswagen Taos goes big on space, short on refinement
Commenting is closed for this article
Contribute
Send us a tip Comment Contact the editor
Follow Us