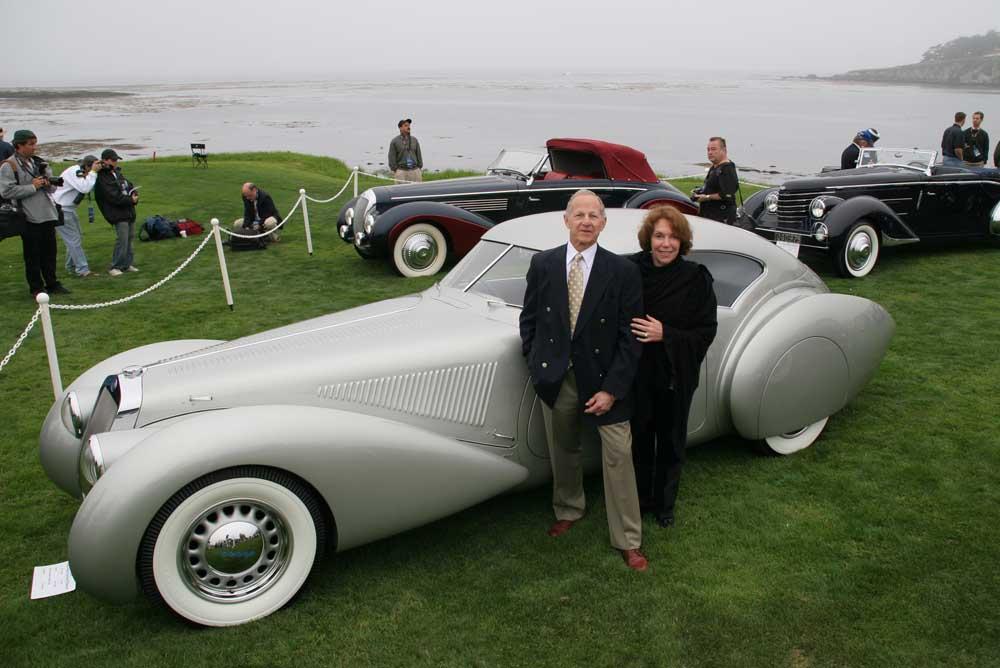 You wouldn't have a hard time finding Bob Petersen's "Round-Door" Rolls. Not with the wing-like rear end capped by a massive, vertical fin. Though it didn't capture the Pebble BeachBest-in-Show honors, it was one of the clear crowd favorites at the 2005 Concour d'Elegance. Not that many years ago, the one-of-a-kind Rolls was wandering the country, alongside the bearded-lady and dog boy, on the carnival circuit. Its history is a bit "smoky" according to Petersen, the legendary automotive publisher and benefactor of the Los Angeles automotive museum that bears his name. Replacing the cheap gold paint and fixing up the once-elegant interior wasn't easy, and Petersen will only hint at the cost, which if Pebble past is prologue, likely cost upwards of a couple million dollars. 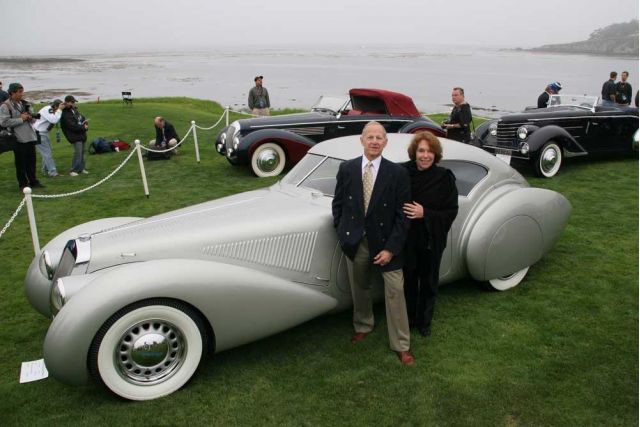 It ain't cheap getting into this exclusive used car show, which is why you tend to see the same names over and over again, like Sam Mann, whose incredible '37 Delage took top honors this year. I saw the striking coupe driving up to the gates at The Lodge and, like a mouse searching for the Pied Piper, couldn't do anything but find it and stare in absolute awe. This was Mann's fourth best-in-show, by the way, and he beat out other tough competitors like fashionista Ralph Lauren and the comedian, Jay Leno.

While the Tonight Show host has achieved some incredible restorations in year's past, Leno's entry this year went into the unrestored category. And it proves that there are still incredible bargains to be had -- if you know where to look. His Duesenburg had been tucked away in a barn back in 1946 after a mechanical breakdown. The owner died and over the years, never even checked what was in the old building, which nearly collapsed during a 1994 earthquake. Then, last August, Leno got a tip and took a crew over to crack open this automotive time capsule. He's done just enough work on his lucky find to turn it into a slightly rusty daily driver.

Out on the manicured lawn of Pebble's 18th Fairway, another Rolls was saved from an ignominious fate. Over the years, this royal sedan had served pedestrian duties and was even converted into a pickup, at one point trading hands for just a couple hundred dollars. A few stalls away, a beautiful Mercedes Special Roadster had once sold for just $2100, but back then, no one quite knew what to make of the car that had been the personal property of Gestapo Chief Hermann Goerring. An East Coast collectors syndicate has begun to restore the Mercedes, while leaving the bullet hole in the fender, and another in the driver's window.

Sometimes, the real attraction at Pebble Beach isn't the way the lavishly restored cars look now, but the stories of how they got out onto the 18th Fairway.