Stupid Roads and the Stupid Cities That Maintain Them 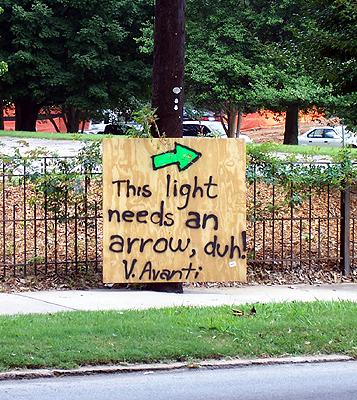 Every city has its crappiest thoroughfare. In Ann Arbor, Mich., you want to stay off University almost any hour of the day during school - students rule the road and jaywalk all over the place and no one even cares that it's a street and not a slightly more upscale version of the same chaos that rules Calcutta. (What's your favorite stupid road? Tell us by clicking to make a comment below.)

In Atlanta, many roads would qualify for this distinction. But for sheer lunacy, the title of Atlanta's Least Thought-Out Road goes to Briarcliff Rd.

Briarcliff Road straddles the line between Fulton and DeKalb County. It's a north-south venue that, like other roads in Atlanta, suddenly changes name when you cross North Ave. (which runs east-west). The reason it changes names is a horrible reminder that Atlanta wasn't always the city "too busy to hate" - Briarcliff Rd. becomes Moreland Ave. south of North because that's the part of town where black people lived, and white people didn't want to live on the same street.

So the stupidity starts with the names. But it quickly rips through a lot more reasons. At the end of Briarcliff near Ponce de Leon Blvd., the road wiggles to avoid trees planted in the 1920s. Those trees are now near the end of their lifespans and have grossly overgrown the narrow strip between street and sidewalk, so much so, you're forced to veer away from them into another lane of traffic. The city won't cut them down because neighborhood greenies protest - despite the fact that, a couple of years ago, a woman and her child were killed in their car when a similar tree fell after a gentle rain.

Briarcliff at this end is also a four-lane road and handles a lot more traffic than it ever was meant to carry. But instead of creating a left-turn lane for drivers to hit Ponce and head home to Decatur, there's only a green light that lets one or two cars skitter through the intersection. In the other direction, there's a turn so you can make it to the new Home Depot or Krispy Kreme, mind you. Wise drivers always choose the southbound right lane because they eventually want to make it home. The situation's so bad, drivers and citizens are forced to put their protests to plywood, as you can see above.

Briarcliff opens up nicely the further north you travel. Where it winds right by TCC's editorial office, it's blesseed with a new turn lane, wide brick-lined sidewalks and a bike path. And even near the Ponce intersection it has its share of local flavor in the person of Zucchini Man - a local celebrity known more for the bike shorts he wears to show off his wares, as it were.

But until they fix the trees and the lights, Briarcliff Rd. is among the stupidest in Atlanta. And until you've tried to navigate your way through the 47 versions of Peachtree Rd. we call our own, you don't know what a dubious honor that is.