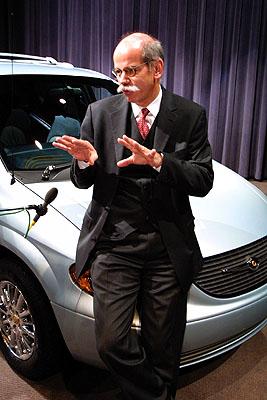 As the reality settled in of Juergen Schrempp’s retirement from DaimlerChrysler and the ascension of Dieter Zetsche to replace him, several questions will need to be answered, according to conversations with executives close to the situation:
Will Schrempp engineer an ascension of his own to the chairmanship of the supervisory board? As reviled as Schrempp is, he still has powerful allies on the board and with labor.

Is there fire behind smoke that Schrempp and other senior Mercedes-Benz executives have opaque investments in supplier companies doing business with DaimlerChrysler, and will German justice officials press an investigation into the matter?

Will Mercedes-Benz chief Eckard Cordes really leave the company? And if so, will he join with an investment group to try and force a break-up of DaimlerChrysler by acquiring shares? Many investment bankers and shareholders feel that with Schrempp possibly gone from the company altogether, unless he hangs on to the supervisory board position, the company could be broken up with Chrysler being sold off.

Is there a way for Dieter Zetsche to get Wolfgang Bernhard back into the company? Bernhard was run out of the company last year before he had a chance to assume full control of Mercedes-Benz. His aggressive suggestions about reforming Mercedes angered the works council who pressured Schrempp to oust him. With Cordes likely leaving, could Bernhard quit his job as head of the Volkswagen brand group, sit out a year, which would be the minimum called for in his non-compete clause in his contract at VW and join back up with Zetsche in the middle of 2006? Would he want to? He is practically a lock to run Volkswagen after Bernd Pischetsrieder retires from VW. But he may prefer to return to Daimler where he’d be in line to succeed Zetsche and be on hand should Zetsche need Bernhard to return to Chrysler if Tom LaSorda doesn’t work out as CEO.

Is Dieter Zetsche committed to keeping Chrysler Group inside DaimlerChrysler? No one knows the outlook for the division better than Zetsche. Did Zetsche pare down Chrysler far enough to make it attractive for a buyer?

Only some of this will be answered in the next couple of weeks. But it’s a German soap opera that is worth watching.—Jim Burt