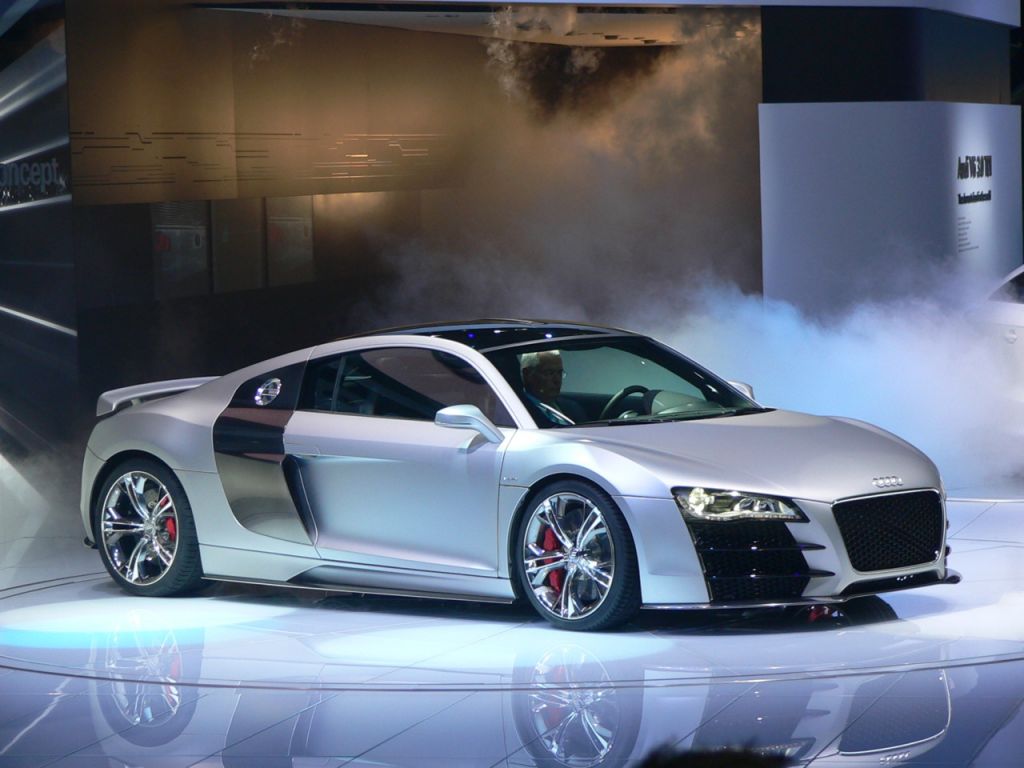 Last year at Detroit Audi rolled out a Q7 SUV ‘concept’ powered by a V-12 Bluetec turbodiesel making 500 horsepower and 738 pound-feet of torque. Now it’s bringing forth another ‘concept’ that’s even more fit for this rip-roaring oil-burner: the mid-engine R8 sports car.

It’s more fit because the engine is closely related to what powers the R10 racecar. In the R10, the engine displaces 5.5 liters and makes more than 650 horsepower, allowing it to go up to 205 mph. The TDI-powered racecar has now won LeMans twice.

The engine employs chain-driven camshafts and a chain-driven oil pump and is made of high-strength aluminum with a cast-iron-and-graphite crankcase. The upper portion of the engine has its own reinforcing ladder frame. The two huge turbochargers spool up boost pressures of up to 37.7 psi, with the help of two large intercoolers.

In the R8 V12 TDI concept, there’s a six-speed manual transmission, and the quattro permanent all-wheel drive system is tuned for a starting torque distribution of 40/60 front/rear.

The concept is covered in a special matte “Grace Silver” bodywork, and gets accentuated wheel arches and larger air openings relative to the standard R8, along with a rhombus pattern on the air inlets and outlets similar to those used on the RS vehicles. Another noteworthy feature is the race-inherited NACA ductwork in the middle of the roof, which brings cooling airflow down and across the engine’s cylinder banks.

Other upgrades on the V12 TDI include carbon-fiber-reinforced ceramic brakes with red, six-piston monobloc aluminum calipers in front and fixed calipers in back.

The V12 TDI also differs from the R8 with its glass roof, restyled rear glass lid, and new air deflectors. Like in the R8, the engine bay can be displayed with special LED lighting. The R8’s eye-catching LED exterior lighting is also prominent here.

Inside, the V12 TDI is different with respect to details. A three-spoke steering wheel covered in Valcona leather has a die-cast magnesium core for added strength, and Dynamic/Sport/Race settings are moved to the steering wheel. Aluminum and carbon-fiber trims have been used more throughout.

Audi says that the concept’s engine already meets the Euro 6 emissions standard that will probably take effect in 2014. It employs two particulate filters, two separate control units for the engine, and a second downstream catalytic converter. There’s also a system through which aqueous urea (AdBlue) is injected into the hot exhaust, helping reduce NOx emissions.

No word yet on whether the R8 V12 TDI is headed for production. To us, there seems like no better way to supplement Audi’s racing wins with some prestige in the driveway, so we’re betting on it.